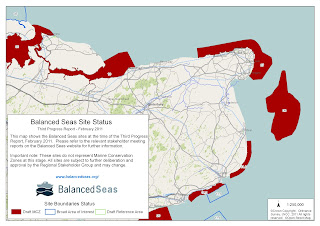 On 12th December Defra released its long-awaited consultation on the next stages of designation of Marine Conservation Zones (MCZs) in English and non-devolved waters.

Along with other English Wildlife Trusts, Kent Wildlife Trust is gravely concerned at the lack of ambition shown in this consultation.  Defra proposes to designate only 31 of the 127 sites recommended by experts and stakeholders at the end of August last year.  This includes just four small sites of the eleven MCZs recommended around Kent and just 9 of the 31 recommended in the south east.  The four Kent sites are: Medway Estuary, Thanet Coast, Folkestone Pomerania and Hythe Bay.

Kent Wildlife Trust’s Marine Policy Officer, Bryony Chapman, said:  “We were promised a network of sites to help reverse the decline in our marine wildlife and habitats, and this does not even approach a network.  We are bitterly disappointed that the Government has largely ignored the recommendations made by the stakeholder groups, and is failing to safeguard the future of our seas.”

The 127 recommended Marine Conservation Zones were chosen after two years of hard work by more than one million stakeholders from all sectors of the marine environment and at a cost of over £8.8 million to Government.  Kent Wildlife Trust was heavily involved in this process, attending all the stakeholder meetings, discussing the best sites for wildlife and for all the various industries and recreational users and reaching consensus on a network of sites across the south east.

Seven of the recommended sites around Kent are not being put forward for designation in this consultation.  Of these, four have been identified as being at high risk to damage, and yet their designation is being delayed for an undetermined time, so they will continue to be degraded, and wildlife lost.
See Editors’ Note 1.

To admire some of the many wonders these MCZs feature, visit The Wildlife Trusts’ interactive map at wildlifetrusts.org/MCZmap.  This includes videos taken on survey dives in several of Kent’s recommended Marine Conservation Zones, showing the wonderful and fragile marine life we are trying to protect.

Marine Conservation Zones should protect the species and habitats found within them from the most damaging and degrading of activities whilst mostly allowing sustainable activity to continue.  The network was designed to ensure that we don’t end up with isolated and vulnerable sites and to ensure that the wide range of marine habitats found in UK seas are protected.  Failure to designate all but a very small proportion of sites recommended by these stakeholders will mean that we lack the ecologically coherent network that our seas so badly need to recover.

The UK’s marine habitats are rich and diverse but largely unprotected - which is why The Wildlife Trusts spent a decade asking the Government to pass the Marine and Coastal Access Act 2009.  This included a commitment to designate this ecologically coherent marine network of protected areas.

The seas surrounding Kent have an astonishingly varied range of submerged landscapes which support wonderful marine life: from sponge meadows and shrimp beds to rossworm reefs, and from deep chalk gullies and greensand ridges to massive sandbanks.  Without these habitats and wildlife communities there simply wouldn't be any fish, let alone fantastic dahlia anemones, seahorses, dolphins, brittlestars and all the other wild and extraordinary creatures which are part of a healthy marine ecosystem.

Despite the variety of fantastic species and habitats, our marine environment is in decline.  In the last 400 years, two species of whale and dolphin have gone extinct in UK waters and of the 11 commonly sighted species found in UK waters, all are considered to be in decline.  Basking shark numbers have declined by 95% and species such as the common skate, once abundant in our waters are now critically endangered.  For too long, we have taken this environment for granted, taking too much, with too little care, destroying fragile habitats.

Designation of an ecologically coherent network would provide our seas with the protection they need to recover from past abuses and help them to be restored to their full potential.

2) Map of the recommended MCZs and the sites put forward for 2013 designation is available on request.

3) Background to recommended MCZs: At the end of 2009, the UK Government passed a piece of landmark legislation, the Marine and Coastal Access Act. This was swiftly followed, at the start of 2010, by similar legislation in Scotland - the Marine (Scotland) Act. These pieces of legislation place a duty on the UK, Welsh and Scottish Governments to dramatically boost protection by creating an ecologically coherent network of protected areas.  By 2013, the UK, Scottish and Welsh governments should designate their network of protected areas.  The 127 recommended MCZs mentioned above cover England and non-devolved waters.  The Scottish Executive and the Welsh Assembly are in the process of determining their network. The Welsh Assembly is in the first round of consultations for its sites and the Scottish Assembly is expected to release its proposed network for consultation later this year. The Northern Irish Assembly is currently consulting on its Marine Bill which should ensure this network extends into Northern Irish waters.

4) Kent Wildlife Trust is the leading wildlife conservation charity for Kent and Medway. Since its formation in 1958 we have worked to make Kent a better place for both wildlife and people. We manage five visitor centres and 60 nature reserves covering 7,500 acres, and we are supported by over 31,000 members and around 1,000 registered volunteers.

5) The Wildlife Trusts wildlifetrusts.org
There are 47 individual Wildlife Trusts covering the whole of the UK.  All are working for an environment rich in wildlife for everyone.  We have more than 800,000 members including 150,000 members of our junior branch Wildlife Watch.  Our vision is to create A Living Landscape and secure Living Seas.  We manage around 2,300 nature reserves and every year we advise thousands of landowners and organisations on how to manage their land for wildlife. We have 35,000 volunteers and host around 17,000 events engaging people with nature every year.  We also run marine conservation projects around the UK, collecting vital data on the state of our seas and celebrating our amazing marine wildlife.  Every year we work with thousands of schools and our nature reserves and visitor centres receive millions of visitors.  Each Wildlife Trust is working within its local communities to inspire people about the future of their area: their own Living Landscapes and Living Seas.