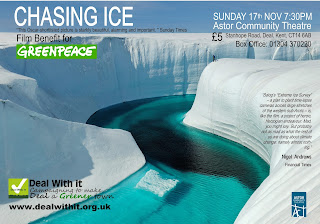 Deal  With It has organised a screening of the award winning film 'Chasing Ice' on Sunday 17th November at 7:30pm at the Astor Community Theatre. Cost is £5

Proceeds of the film show will go towards Greenpeace's 'Save the Arctic' Campaign which is trying to protect this fragile environment.

Colleagues from Canterbury Greenpeace will be doing a short talk after the 76min film ends and will have a stall with campaign material.

In Chasing Ice, Balog deploys revolutionary time-lapse cameras to capture a multi-year record of the world’s changing glaciers. His hauntingly beautiful videos compress years into seconds and capture ancient mountains of ice in motion as they disappear at a breathtaking rate.

For more details on the film see their website - Film Trailer below:

Deal With It are very grateful to the support from the Astor Community Theatre for staging this event. The theatre bar will be open from 7pm.