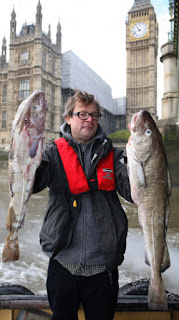 (1) Hugh Fearnley-Whittingstall has made a plea for support for a campaign to try and stop wasteful fish discards.

Half of the fish caught in the North Sea is thrown back overboard dead due to the current quota system imposed by the EU Common Fisheries Policy.

The Fish Fight Campaign will officially launch with a broadcast of “Hugh’s Fish Fight” presented by Hugh Fearnley-Whittingstall in January 2011.
Thousands have already signed up to support the cause, and Client Earth is also on board.

If you are at all interested in the future of our oceans, and the future of fish as food, then please go to www.fishfight.net and check out phase 1 of the campaign.

2) Greenpeace's Tuna Campaign. As you may have read we were all set to take action against Tesco this weekend when the unexpected happened. We have produced a league table of the best and worst offenders against tuna (fishing with fish attraction devices, seine purse nets etc) and had identified that Tesco were the worst own-brand supplier. When Tesco learned of this, and that Greenpeace were preparing a nationwide weekend of direct action against them, they agreed to change all their own-brand tuna to rod and line by the end of 2012. Good for them. But it means our campaigning has to take a different tack. We will be doing it a bit differently but will now target Princes tuna in the hope of making them see the light.

The Tesco result is great news, it really shows that we can make a difference.http://www.greenpeace.org.uk/
Posted by SteveW at 8:38 PM