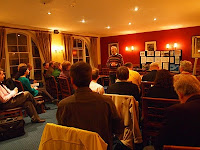 Some twenty representatives of various organisations interested in or concerned with cycling gathered at the Royal Hotel to discuss the possible forming of a cycle forum in Dover District.

People introduced themselves and the organisations they represented and gave a brief outline of why they had come.  KCC Deal Councillor Kit Smith and Kent Highways officer, Steve Darling, spoke about the developments in Deal and Dover.  DDC Councillor Nigel Collor and DDC officer Gordon Measey talked about things from the district perspective. 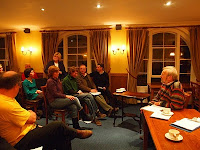 They all stressed the importance of a bottom up, community lead approach where concerns and priorities could be fed into the councils by a group who agreed on what is important to local residents and cycle users.

People felt that the existing cycle paths needed better surfacing which was less costly and much safer to use.  Cycle paths needed to be “joined up” and clearly signed so that cyclists knew where to ride in safety.  It is clear that there are very few dedicated cycle paths in the county.  Almost all are shared by cyclists, pedestrians and people with disabilities.  The general public need educating on the use of the paths so everyone can share them in safety. 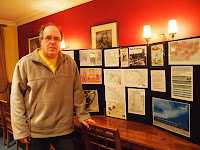 SPOKES representatives said that there are cycle forums in all other East Kent Districts and they are a useful in communicating the needs of cyclists and pedestrians alike to KCC and those responsible for the creation of cycle paths.

Cllr. Smith suggested that the forum’s aims should be:

•    Networking among members
•    Planning new cycle ways and monitoring plans for those in the pipe line
•    Giving advice and being advocates for cycling
•    Providing a connection between users, planners and politicians

It was agreed that Ian Killbery should arrange a further meeting in early April at the later time of 7pm, preferably not on a Monday.  This meeting was tasked with the election of a Chairman and Minutes Secretary.  The agenda would contain an update on events since this meeting.

(Thank you Sue Delling for the report and Rose Dowd for the Photos ...)
Posted by SteveW at 10:07 AM