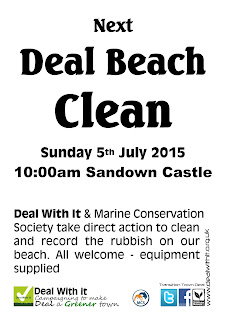 The next Deal Beach Clean will be this Sunday (5th) starting at 10am. We will be meeting at the Sandown Castle end of the Beach.

We supply pickers, bags and gloves - we will not be logging what we find for the Marine Conservation Society - Please sun hat (tasteful), sun cream and something to drink. The clean will last about 1-1.5hrs.

Posted by SteveW at 7:19 PM No comments:

We know that we cannot continue to burn fossil fuels as we have done for hundreds of years - the climate is already changing and global warming is having an effect in many parts of the world.

It seems that the oil companies don’t share our concerns and are continuing to explore for new fields as if nothing is happening. Those in charge of the big five oil companies have been encouraged in their work by bonus payments linked to $1 trillion of exploration and extraction.

Even when the price of oil has dropped so dramatically, projects to find more reserves have gone ahead though companies know that the world will be unable to burn the fossil fuels they find. Shell’s chief executive has actually endorsed warnings that reserves cannot be burned unless some form of carbon capture is available. At present, only trials of carbon capture and storage (CCS) are going ahead and no commercially viable project is in the offing. If CCS were up and running, there would be so much carbon dioxide removed that we would be unable to find places to store it.

We have to remember that shareholders in oil companies are ‘in it for the money’ and therefore would not approve of oil companies putting their money into renewable technologies to produce clean energy because the returns would be so much less. Shell has only invested $1billion each year on green schemes out of $33 billion of capital expenditure.
Posted by SteveW at 9:27 PM No comments:

Amazing news this week! The G7 nations have agreed on strong measures to cut greenhouse gas emissions by phasing out the use of fossil fuels by the end of the century. Angela Merkel, the German Chancellor, has headed the negotiations that have reached this historic conclusion. There was also agreement on limiting average global temperature rise to 2°C as compared with pre-industrial levels.

This result makes for great hopes of a plan for complete decarbonisation at the Paris climate talks in December. It is unfortunate that leaders had failed to sign up to an immediate agreement on binding targets but we must be grateful for what we have. This agreement has followed the UN climate change panel, the Intergovernmental Panel for Climate Change (IPCC), in its recommendations that greenhouse gas emissions must reduce from between 40% and 70% by 2050, using 2010 as a baseline.

The G7, Germany, France, Britain, USA, Canada, Japan and Italy, have also agreed to work for an end to extreme poverty and hunger worldwide, aiming to reduce the number of people suffering hunger and malnutrition by 500 million by 2030. There is also an agreement to improve the global response to crises such as the Ebola epidemic.

We can only celebrate such a momentous agreement between such powerful nations and we can look forward to the Paris talks when we hope that we can get a definite agreement to achieve net zero greenhouse gas emissions well before the end of the century.
Posted by SteveW at 9:28 PM No comments:

Oil has been produced from tar sands in the Canadian province of Alberta for 50 years. Tar sands produce the dirtiest form of oil which, when burnt, produces more carbon dioxide than any other fossil fuel. It also leaves behind polluted grounds and rivers.

Fort Mckay, a First Nations hamlet in Alberta, is home to the Cree and Dene nations and has descendants from Scottish and French fur traders. While the oil has made some people rich it is also poisoning the waters of the Athabasca river. There have been high rates of cervical cancer and a rare bile duct cancer among those that fish in the river and hunt on the land.

The Canadian government claims that the tar sands are the third biggest proven oil reserves in the world after those in Venezuela and Saudi Arabia. There are 168 billion barrels but huge amounts of energy are required to extract the thick crude oil from the earth which makes it about 4 times more carbon intensive than ordinary oil.

Early mining projects also stripped away 1,850 sq. miles of forests to get to the oil and remaining trees were robbed of their water supply and slowly died. So another sink that could have absorbed many tonnes of carbon dioxide was removed.

Scientists have warned that mining all the tar sands oil will mean game over for the climate but the Canadian government does not heed any warnings and continues to go ahead.
Posted by SteveW at 7:30 AM No comments: 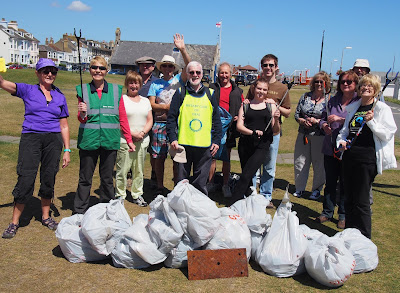 A big thank you to our 18 volunteers who collected over 38kgs of rubbish off Walmer Beach today.

Three of our volunteers also help launch a boat of the beach - all part of the service :)

The next Beach Clean will be at Sandown Castle end of the beach on Sunday 5th July starting at 10am. All welcome
Posted by SteveW at 12:29 PM No comments:

It was extremely disturbing to read that the European Union wasted more than 80 million tonnes of food last year, a shameful amount, with the UK the highest with 15 million tonnes.

So it was good news that the French National Assembly had voted unanimously to bring in a new law that bans supermarkets from throwing unsold food into the bin and from deliberately spoiling such food so that it cannot be eaten. Instead, food must be passed to charities or be sent for animal feed. The new law provides for a programme of education about food waste in schools and businesses.

There have been reports over recent years of poor families, the unemployed, students and homeless people foraging for food in supermarket bins at night and finding food that has been thrown out as its best-before date approaches. Some French supermarkets have been pouring bleach into the bins to stop such practices.

Campaigning groups have welcomed the new legislation but have been quick to point out that it is not a magic solution and more needs to be done to prevent the waste in the first place. The American tradition of ‘doggy bags’ has generally been frowned upon in France but some restaurants are now happy to supply customers with such, if required.

Here in the UK we only have voluntary agreements with supermarkets and suppliers and many supermarkets send surplus food to FareShare, a charity focussing on food waste. Surely, we need legislation, too.
Posted by SteveW at 6:43 PM No comments: