Deal With IT's Secretary Victoria Nicholls writes a regular column in the East Kent Mercury:
It seems like an early Christmas present for the green movement. Energy secretary Chris Huhne’s announcement last week that the government intends to make reforms to the market so that renewables will be more profitable than fossil fuel energy.

There are plans for enormous wind farms around our shores. The Thanet array, visible to us here in Deal on a good day, is currently the largest off shore wind farm in the world but it will be dwarfed by future installations off the East Coast.

As well as helping to meet our low carbon electricity needs of the future – we need to produce 30% of our electricity from renewables by 2020 – these wind farms represent a chance to rebuild our ailing economy after the recent banking crisis. This also means the chance to generate up to 25,000 much-needed jobs in this new industry.

Towns that were once the heart of the fishing industry, such as Grimsby, are eager to take the opportunity to make their towns prosperous once again by investing in an industry which will create real jobs, both during construction and for maintenance when the turbines are up and running.

But there are worries. The government is not leading strongly enough; it is not co-ordinating the emerging industry and British firms may not get enough of the work that will ensue. Foreign companies are queuing up for the chance to invest, heavily subsidised by their governments, while British companies are being refused loans by banks that have been bailed out by the taxpayer.

The government’s promised green investment bank has not materialised. Another victim of the recession, we hear, from Mr. Huhne but short-term thinking will not bring us out of this recession. We need jobs, real jobs that will help to create the low carbon society of the future.
Posted by SteveW at 8:38 PM No comments:

Deal With IT's Secretary Victoria Nicholls writes a regular column in the East Kent Mercury:
Christmas is coming and a time of over indulgence beckons. We do it every year, don’t we? We buy twice as much food as we are ever going to eat and end up throwing it away. Why not think a little bit more carefully about it this year? Many of us will have much less to spend anyway; many people have lost their jobs and are depending on benefits to see them through a very tough time. Is a simpler sort of life really such a bad idea?

Why not aim for the money that you spend to benefit someone other than a giant High Street retailer? We all have our favourite good causes and there is usually a way that we can buy goods, either in a shop, from a catalogue or on the Internet, that will enable a charity to continue its good work.

Shopping in a charity shop is, of course, the best way of recycling goods. You can donate items that you no longer need or use for the charity to sell to raise money for the cause. You can also buy goods from the shop to give as Christmas presents. This not only benefits the recipient of your gift but also the charity that has received your money.

When you shop for your Christmas food, think carefully before you buy special offers. Do you really need so much more than for an ordinary weekend? Try to stick to the principle of buying local food as much as possible. You will then eat fruit and vegetables that are in season, reduce food miles and therefore carbon emissions and support local growers into the bargain. Be creative with your leftovers – there are lots of lovely dishes to be made.

Most of all have a very Merry, if simple, Christmas and a Happy New Year!
Posted by SteveW at 8:36 PM No comments:

The Deal With It organising group meet on Sunday:
More details to follow in a mailing
Posted by SteveW at 8:58 PM No comments:

Deal With IT's Secretary Victoria Nicholls writes a regular column in the East Kent Mercury:The effects of climate change are rarely more obvious than in the home of the polar bear. There have been many reports of melting ice in the Arctic Circle, and scientists predict that if we continue to produce greenhouse gases at the present rate, two thirds of the world’s polar bear population will probably be gone in 40 years, if not sooner.

Recently, the Obama administration in the USA designated an area of 187,000 square miles of territory off the coast of Alaska as a protected area for polar bears. On the face of it, this seems like really good news but since the greatest threat to the polar bear is melting ice, giving them a protected area without taken action to limit carbon emissions seems to be nothing more than window dressing.

But there is a lot more at stake here. The designated area is sea ice and oil companies are keen to start drilling once the winter ice has lost its hold. The designation does not prevent drilling or other activities, just that applications will be subject to review. Oil companies are keen to stress that there will be no accidents like the spillage in the Gulf of Mexico and are more than willing to abide by stronger government regulations.

It will be interesting to see whether the corporate strength of the oil companies, waiting to start their explorations in the Beaufort and Chukchi Seas, will overcome any reluctance by the Obama administration to give permission to drill in this protected area. It would seem foolish in the extreme from a layman’s point of view to continue to look for oil in a world that is already burning too much fossil fuel for its energy needs.

It is not enough to hope that the polar bear wins out but it is up to us all to reduce our dependence on fossil fuels in favour of renewables
Posted by SteveW at 8:51 PM 1 comment:

Email ThisBlogThis!Share to TwitterShare to FacebookShare to Pinterest
Labels: ZCC

"Amazing news: at 2.10pm today the Daylight Saving Bill PASSED its crucial second reading in the House of Commons. The campaign won the two votes: an amazing 123 MPs  (including Deal & Dover's Charlie Elphicke ) (voted to close the debate (basically saying they'd heard enough and were ready to take a stance on the bill), with the motion itself being passed with a majority of 82 votes. You can watch the full debate here and read the Hansard transcript of the debate here.
There's still plenty of work to be done to make lighter evenings a reality but right now I want to thank you all so very much for your support in making this victory happen. Today's is the biggest development on this issue for decades, and only with your herculean efforts have we been able to make Lighter Later a reality. Time after time, MPs on the floor referenced your emails, letters and calls in support of the bill as what persuaded them to vote yes today
I'd also quickly like to thank Rebecca Harris MP (and her team) for their amazing work, the rest of the Lighter Later coalition and finally the team here: Sion, Maddy, Suki, Mal, Robin and John, and all at 10:10 – who have been working around the clock over the last few weeks.." from Later Lighter
Posted by SteveW at 1:32 PM No comments:

Great summary of all transition initiatives at the permaculture site http://permaculture-media-download.blogspot.com/2010/12/november-round-up-of-whats-happening.html
Posted by SteveW at 7:20 PM No comments: 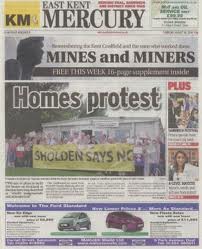 Housing development at Sholden  goes to a special planning committee of Deal Town Council at 7.15 on Wednesday 8th December.

Support the campaign to stop the building of  unsustainable houses on prime agricultural land.... come along to support Sholden Parish Council

http://www.sholdenpc.kentparishes.gov.uk/default.cfm?pid=news&newsid=5933
Posted by SteveW at 2:56 PM No comments:

Email ThisBlogThis!Share to TwitterShare to FacebookShare to Pinterest
Labels: sholden

Deal With IT's Secretary Victoria Nicholls writes a regular column in the East Kent Mercury: It’s that time of year again. Time for the next United Nations Climate Change Summit, this time in Cancún, Mexico. We can but hope that this time it will be different and not a repeat of last year’s dismal failure in Copenhagen.

2010 has been a year of record temperatures and extreme weather and it does not seem possible to restrict world temperature rise to 2ºC. The complexities of the climate system means that even small changes could bring flooded coastlines, disruption to food and water supplies and species extinction. There are nearly 100 small island states and other poor countries that find themselves in the frontline when it comes to climate change and an agreement from rich nations to allow a global temperature rise of 2ºC when a lower limit is necessary will threaten their future.

Energy and Climate Change Secretary, Chris Huhne, said “ If the world fails to stop emissions from continuing to climb by 2020, the prospects for the people on the planet are pretty bleak”. This is from a minister in a Government that seems set to backslide from committing to emission reduction at home. There seems little hope of a binding agreement on the world-wide reduction of carbon dioxide emissions so emphasis is being placed on schemes to reduce deforestation and land degradation, along with pledges of billions of dollars to help developing countries follow a low carbon route.

While the world economic situation is in such turmoil, it is easy to see why governments feel that they do not have time or money to spend on what is not directly affecting most of them at the present time. Such thinking is for the short term but climate change is a long-term problem, which will affect everyone eventually and many people immediately.
Posted by SteveW at 10:07 AM No comments: