Pick up here - drop off there - cheap cycle hire in France's pioneering eco-town of La Rochelle. 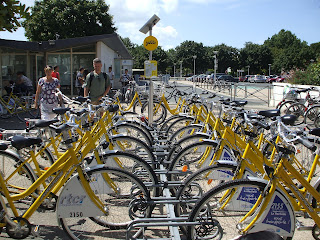 Here's how to sign our on-line petition on local transport in Deal and East Kent. Wouldn't it be great if it were easier to bike-train-bike to work as in La Rochelle!! On-line petition for you to sign here
Posted by Deal With It at 2:47 PM No comments:

On Saturday 5 December 2009, ahead of the crucial UN climate summit in Copenhagen, tens of thousands of people from all walks of life will flow through the streets of London to demonstrate their support for a safe climate future for all.

Part of a global series of public actions, The Wave will call on world leaders to take urgent action to secure a fair international deal to stop global warming exceeding the danger threshold of 2 degrees C.

The Wave, organised by the Stop Climate Chaos Coalition, will show mass support by people from all backgrounds for a better, low carbon future for the UK and the world.

We want the UK Government to show leadership at Copenhagen. We want them to Protect the Poorest, Act Fair & Fast, and to Quit Dirty Coal now, to inspire the deal the world needs..

Join The Wave - the UK’s biggest ever demonstration in support of action on climate change. For more info go to: http://www.stopclimatechaos.org/ There is also a bus going from Canterbury. Please email us for further details.
Posted by Deal With It at 1:39 PM No comments: 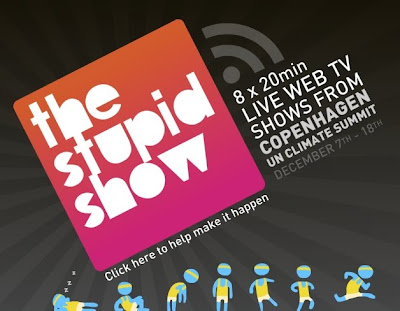 With just 25 days left till the UN Climate Change Conference in Copenhagen, which many say is our last chance to get the treaty which could bring global emissions down fast enough to avoid triggering runaway climate change, the makers of the environmental film 'The Age of Stupid' now believe it is urgent to channel their energy into maximising our collective chance of success at Copenhagen.

But the team need your donations to help finance the show. For more information go to: http://www.ageofstupid.net/money
Posted by Deal With It at 12:45 PM No comments:

Power to the People

On Friday 30th October Deal With It and the Greenerway Cluster were very pleased to welcome the Rt.Hon. Michael Meacher, the distinguished Labour MP, to a crowded meeting in St.George’s Church. Mr Meacher who has served 29 years on the front benches and who has been called the “greenest ever Minister for the Environment” spoke on renewable energy.

Never mincing his words and refreshingly truthful for a politician, he explained where we are now, which is just about bottom of the European league, only producing 1% of our energy from renewable sources compared with 18% in Germany and 47% in Finland. He went on to describe where we could be, and what the obstacles were to achieving a more acceptable target. He felt this was a depressing and shameful position brought about by vested interests and lack of Government will to change. However Mr Meacher raised our spirits by pointing out that the technology to meet our needs with clean energy already exists and that we are favoured by both our natural island geography and our natural inventiveness.

So what is standing in our way? A failure at all levels to address the problems we face and to wake up to the fact that we are heading for catastrophe and must change course. He continued by outlining the huge economic advantages of making that change, both at the personal and national level. He stressed that change in both the way we think, and the way we live was essential. He also praised Deal With It, with it's “brilliant name”, for what they were doing at the local level and for the warm atmosphere of community.

Alistair Gould of the Pines Calyx, long-term local activist on issues of Sustainability spoke next on “Power from the People - How generating clean energy from within our own communities can be practical and affordable”. He explained how this can be achieved and told us of the progress they are making at St.Margaret’s Bay, stating that they are within 2 or 3 years of achieving their goal of making the community energy independent. The meeting ended with questions from the audience and a sense of being inspired to redouble our efforts.
Posted by Deal With It at 11:39 AM No comments: