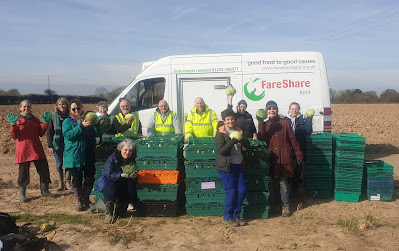 Thank you to our volunteers (Clair, Sarah G, Sarah L, Sonja, Julie, Elaine, Lucy, Sally, Tim, Renate & Steve) on today cabbage glean for @FareShareKent we collected about 750kgs today from a farm in Stourmouth.
We have Gleaned 4 tons of food so far in 2022!

Posted by SteveW at 2:24 PM No comments: 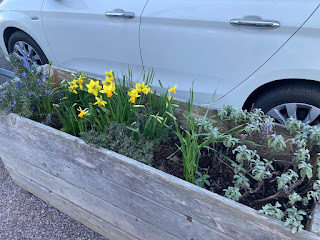 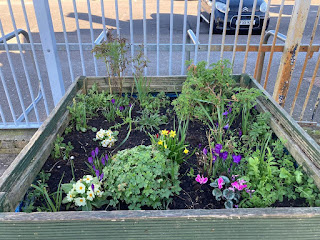 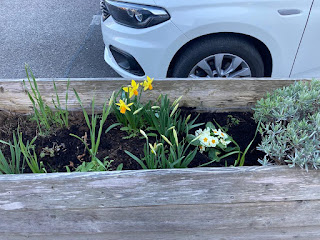 The Deal Station Gardeners were out on Saturday on their monthly tidy up of the planters on the platforms and Spring has sprung at the Station Garden.

A pleasant and social sunny afternoon's gardening today: lots of primroses, and other spring flowers, broad beans, onions and small harvest of sprouts

Many Thanks to Sue, Mary, Vicki, Charles and Sonja for volunteering

Next session on the last Saturday of March at 2pm 26th - if you would like to volunteer please contact Sonja at station@dealwithit.org.uk 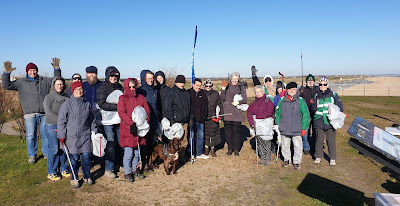 Thank you our 30 volunteers on today's bright but cold Sandown Beach Clean - 3 tyres and lots of small plastic picked today - 28kgs in total.

thx to organising team vicky, charles, john & steve.
Our next Beach Clean is on Walmer Beach on Sunday 13th March meeting at 10am near the Sea Cafe on the Green. #pickdealclean 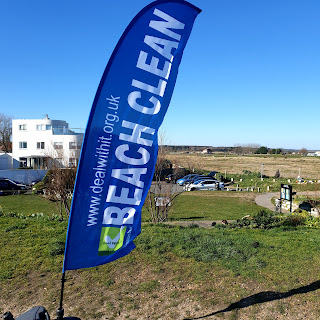 DDC nominated the litterpicking group for their outstanding contribution to the local environment and their efforts to reduce litter.

Litterpicking volunteers in the district go above and beyond to support council street cleaning services, and work in partnership with DDC to make the district a better place to live.

Pick Deal Clean originally focused on litterpicking during the pandemic but have gone on to develop into so much more. Inspired by the arts, they support DDC’s shared goal of changing behaviour in respect to litter, and strive to reduce the act of littering in inventive and inspiring ways.

They have done this by:
Raising awareness through specific events*
Mobilising and inspiring community volunteering
Creating an interactive google map for their regular pickers to take ownership of areas and ensure their efforts are spread across Deal
Using social media to organise and coordinate litterpicking events
Establishing a network of contacts to resolve issues raised by their members in their community
Working with DDC and engaging in liaison meetings

Cllr Martin Bates, Cabinet member for the Environment, said: “I would like to congratulate Pick Deal Clean in reaching the final list for Keep Britain Tidy’s #Litterheroes Award. Not every hero wears a cape, in fact some come armed with a picker and a hi viz jacket and I sincerely thank Pick Deal Clean and all our other local individuals and community groups for the role they play in helping to keep the district clean.”

Helen Charlton, one of the Founding members of Pick Deal Clean, said: “Pick Deal Clean members are delighted to achieve Runner Up for this national award. We have been established for just under a year and this shows that by working together we can all make such a difference to where we live, making our local areas cleaner and more environmentally friendly for the benefit of everyone.”

The Great British Spring Clean is an annual event supported by DDC and local litter- picking volunteers to clear litter from streets, parks and beaches.


Notes to editors:
The Keep Britain Tidy Network Conference attracts over 120 + decision-makers, including local authorities, housing associations and other major landowners, from across England. This event also brings together service and infrastructure suppliers, business leaders with innovative approaches to the environment, influential community leaders and senior figures from the charity sector, along with government ministers and senior civil servants.
*Pick Deal Clean held pop-up awareness raising events including:
A washing line put up in Deal town centre displaying clothing items found on litter picks, interspersed with anti-litter messaging
A rainbow art display made from littered cigarette lighters at St Georges Church
A display made out of crushed littered drink cans at the seafront
A market stand ‘selling’ jars filled with cigarette butts that had been litter picked from the local streets
Pick Deal Clean are on Facebook: https://www.facebook.com/groups/pickdealclean and on Nextdoor Deal. Email: pickdealclean@yahoo.com
#PickDealClean was setup early in 2020
Posted by SteveW at 2:02 PM No comments:

Email ThisBlogThis!Share to TwitterShare to FacebookShare to Pinterest
Labels: litter

Another monster glean for The Felix Project by the Hythe and Deal groups today - another ton on the way to food charities in London.
Plus about 460kilos going to local food charities:
Thx to our volunteers this week - Tim, Sally, Lucy, Jill, Elaine, Clair & Steve.

Posted by SteveW at 6:38 PM No comments: 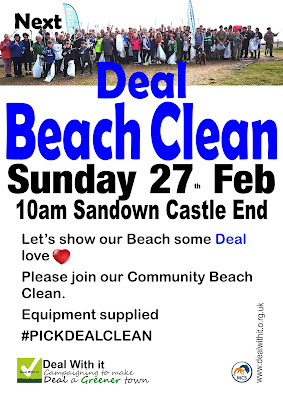 Posted by SteveW at 6:02 PM No comments:

Our first Big Glean of the Year - a Joint effort with colleagues from Hythe - with a ton of cabbages for the The Felix Project in London plus about 460kilos for local food charities in Dover District.

Thx to our volunteers Lucy,Sarah,Tim, Sally, jill, Linda, Eileen, Clair and Steve and special thanks to Trevor & Stephen Bradley for hosting us.

Food Charities Supported this Week:
If you are interested in joining the weekly gleans please email gleaning@dealwithit.org.uk to be added to our mailing list
Posted by SteveW at 1:46 PM No comments:

Now in our sixth season with over 250 sites and over 400 people involved. Our local brewing partner Time & Tide Brewing has used our hops in 18 different style of beer which was available in local pubs, cafes, shops and even the local record store!