We have news of the projects in mind to increase the capacity of our airports when what we should be doing is gradually reducing our dependence on air travel. We hear about proposed plans to expand Gatwick Airport which could mean that the number of flights would be doubled. This means not only double the flights but double the traffic to and from the airport and all the extra vehicles needed for the services required to cope with the extra people. Another runway at Heathrow would necessitate the moving of the M25 – that is something to conjure with – and all the work that would entail to again increase the capacity for flights.

Another option under discussion is an airport on the Isle of Grain – a beautiful area with lots of wildlife and where the local communities are very much against the plan.

Then we hear of the possibility that up to two thirds of our country may be leased to companies for fracking for shale gas. It is reported that 150 applications for licences to frack are expected from major energy companies and the government is planning to bribe affected communities with up to £1bn of financial incentives. They will need compensation when they are dealing with air pollution, noisy trucks, gas flaring and possible water contamination!

We are fast approaching the festive season when most people will be running around preparing for just, in reality, is one day. True, lots of us will have much more holiday than one day but spare a thought for the people who keep our essential services working and who we could not do without.

It is crazy that the chain stores on our High Streets feel that they must open their doors on Boxing Day when most people have had more than enough time to do their shopping. Surely their staff deserve a decent holiday? The out-of-town shopping outlets have led the race in this aspect appearing to be open without a break.

When you are shopping for your holiday food, try and spare a thought for those people who are not so well off; those in fuel poverty, those who do not have money to buy food and those who are homeless. Please do not buy food without a clear plan; after all, you do not really need to eat twice as much as you normally would! Try not to fall for the ‘Buy One Get One Free’ offers unless you know that you can use the food up or give it away to others. There are some lovely recipes for leftovers out there so be inventive and, most importantly, don’t waste food.

Spending time with friends and family is the most important aspect of Christmas, so have a very Merry, Green Christmas and a Happy New Year! 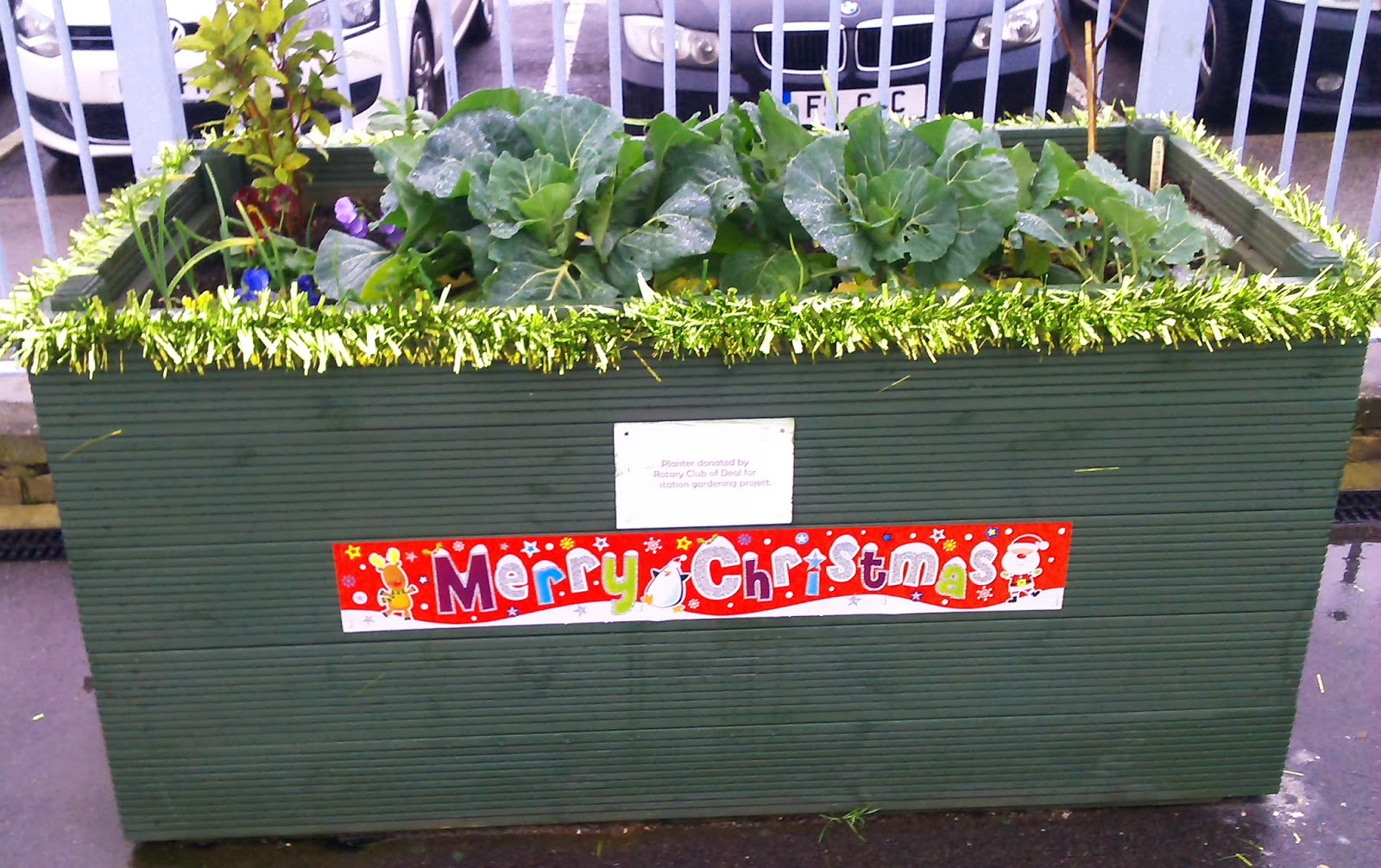 MERRY CHRISTMAS EVERYONE....ALL OUR STATION PLANTERS HAVE BEEN DECORATED FOR CHRISTMAS....PIC ATTACHED....WE HAVE MADE CARDS FOR JEWSONS AND THE GARDEN CENTRE...E MAIL CARD TO RIPPLE VALE SCHOOL.......AND SARAH WILL FORWARD E MAIL THANKS TO ROTARY AND OTHER DONATORS.........IT HAS BEEN A GREAT FIRST YEAR.....THANKS AND BEST WISHES TO ALL INVOLVED.....AND LOOKING FORWARD TO 2014....BEST WISHES, ADRIAN AND SUE
Posted by SteveW at 7:23 PM No comments: 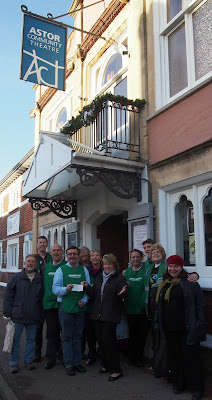 Deal With It presented our colleagues in Canterbury Greenpeace with a cheque for £200 for their 'Save the Arctic' campaign today at the Astor.

The money was the proceeds from the very successful film show 'Chasing Ice' at the Astor at the end of November.

The Arctic is a precious, beautiful region that faces an unprecedented threat. Oil companies are moving north, seeking to exploit its resources, while climate change is causing the Arctic to change beyond recognition. Three-quarters of the sea ice has melted since summer 1980, and scientists
predict the Arctic Ocean could be ice free in the next few decades. If that comes to pass it will be the
first time since humans developed our civilisation.

The only reason oil companies can drill there is because the ice is retreating. They’re drilling for the
oils that caused the melting in the first place. It’s crazy. We have to draw a line in the ice and say to
the oil companies, ‘You come no further’. That’s why Greenpeace has held peaceful protests in the
American, Norwegian, Greenlandic and Russian Arctic.

The Arctic is a region that could not cope with an oil spill of the magnitude of the Deepwater Horizon
disaster. It is forbidding, with darkness six months of the year, and ice returning every winter. BP
needed 6,000 boats to deal with the consequences of the Gulf of Mexico blow-out, but the Arctic
does not have an infrastructure to react at anything like that level.

The money raised by Deal With It will help to fund actions and campaigns to protect the Arctic - before it's too late."

More details on Greenpeace's campaign  can be found out at their website http://www.greenpeace.org.uk/arctic
Posted by SteveW at 2:00 PM No comments:

Of course, it is not only here that food is wasted; several studies have shown that between one third and one half of all food produced in the world is thrown away and it has been estimated that this amounts to 1.2 – 2 billion tonnes each year.

We all know that that there are many people worldwide who are malnourished but still food is wasted. Not only is this a scandal but the global carbon footprint of food waste is 3.3 billion tonnes of carbon dioxide. It is now imperative that we lower our carbon emissions if we are to have any chance to slow down the climate change that is already happening. It has taken a long time for governments and organisations to realise how serious the problem is but at last action is being taken in Europe and around the world.

It is very strange but there is a majority of people in all walks that think food packaging waste is a greater danger than food waste itself. After all, the packaging has served its purpose, preserved the food and is mostly recycled but perfectly good food, produced at great cost, is just thrown away.

A European Union survey has recently shown us that houses in the UK are among the most expensive to heat in Europe. We have one of the highest levels of fuel poverty and our country has one of the highest proportion of homes in a poor state of repair in Europe - more than 10 million families live in a home with rotting windows, a leaking roof or damp walls. This seems incredible for one of the richest countries in the world.

This situation has come about following years of poor construction in the building industry exacerbated by lack of government legislation regarding building standards, particularly regarding insulation and draught proofing.

This poor housing stock means that thousands of people are dying each year because their houses are not only cold but are also damp – a great combination causing debilitating disease. One way out of this situation was ECO – the energy company obligation – which provides for homes to be insulated by the energy companies for a small cost on all our fuel bills. The Big Six energy companies have said that they can no longer continue with this policy and have urged the government to step in and cover the cost through general taxation.

While we have to question the energy companies’ profits which, of course, have to pay share holders, we must ask if it is fair that these costs are added to fuel bills which must be paid by all, rich or poor.

23 November 2013
Various energy saving events are being planned – Green Doors trail, a Public Energy Saving event in Autumn 2014, a Draught-busting programme, and the hire of a thermal camera so you can identify where heat is being lost.

We are working on a Deal Spring Clean event to involve as many community organisations as possible.
Following the success of the Breaking Ice showing we hope to arrange future film shows.

A Winter Solstice Fair is being planned at the Landmark Garden on 21 December, weather permitting.

Planning is under way for a seed and produce-swop early next year.

On a more bureaucratic note we are going to move forward to gain formal accreditation as Deal’s Transition Town Group.

Finances are relatively healthy at the moment but our fairly ambitious plans for 2014 will require a more intensive fundraising programme – details to follow.