Deal With IT's Secretary Victoria Nicholls writes a regular column in the East Kent Mercury :A recent report from meteorologists has informed us that there are more greenhouse gasses in the atmosphere now than at any time in the past. Despite many countries trying to de-carbonise their power production, many more are going all out for industrial growth with fossil fuels as a base.

It is difficult to expect developing countries, who want to follow our example and have all the amenities that we have, to slow their development to take into consideration climate change. Many countries, however, do have a much more sustainable lifestyle than us because they are not as industrialised and they are also likely to suffer the more serious effects of a warming planet. The oceans are becoming far more acidic with the absorption of carbon dioxide from the atmosphere. This has a catastrophic effect on the food chain and this has consequences for many species around the world.

We have all enjoyed a very long summer here this year that has also given us sufficient rain to keep our gardens looking good. What if future years give us much more heat but no rain? This is always a possibility as the climate warms. We do not know what kind of winter we will have as yet and dread the thought of another winter of torrential rain and awful flooding.

The world is becoming perilously close to leaving it too late to tackle the problems of excessive carbon emissions – let us hope that nations will work together for a low carbon future. Victoria Nicholls. Transition Deal.
Posted by SteveW at 8:49 PM No comments: 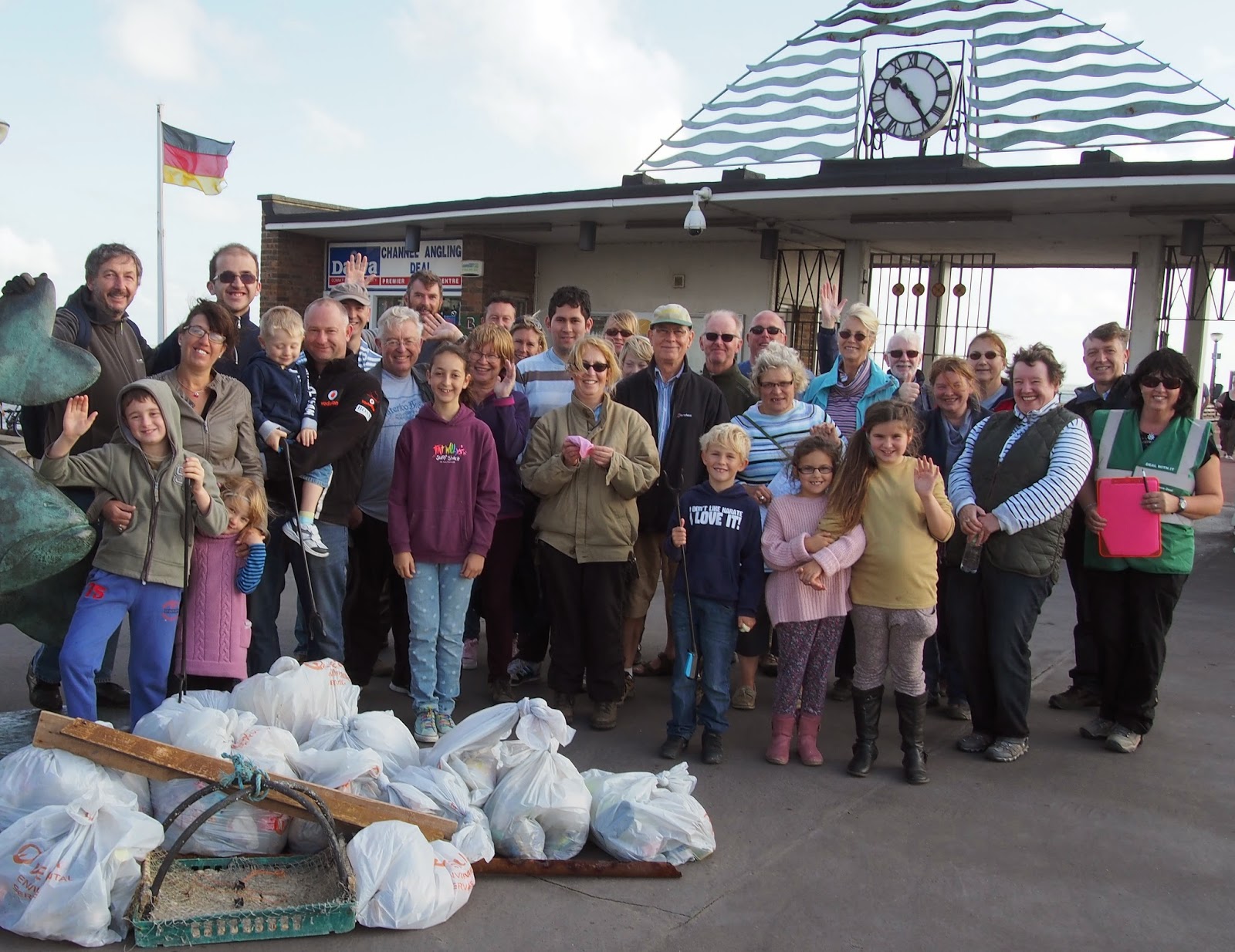 Very strong winds and a high tide today but this did not dent the enthusiasm of our 34 volunteers out this morning as Deal's part of the Great British Beach Clean.

Plus:
That is a staggering 80kgs - a definate record for us.

A Massive thank you to our wonderful volunteers and also to Deal Beach Warden, Wendy Boorman for keeping us in order and doing all the collation work for the MCS.

Posted by SteveW at 7:53 PM No comments:

Join the ‘Great British Beach Clean’ this Sunday in Deal 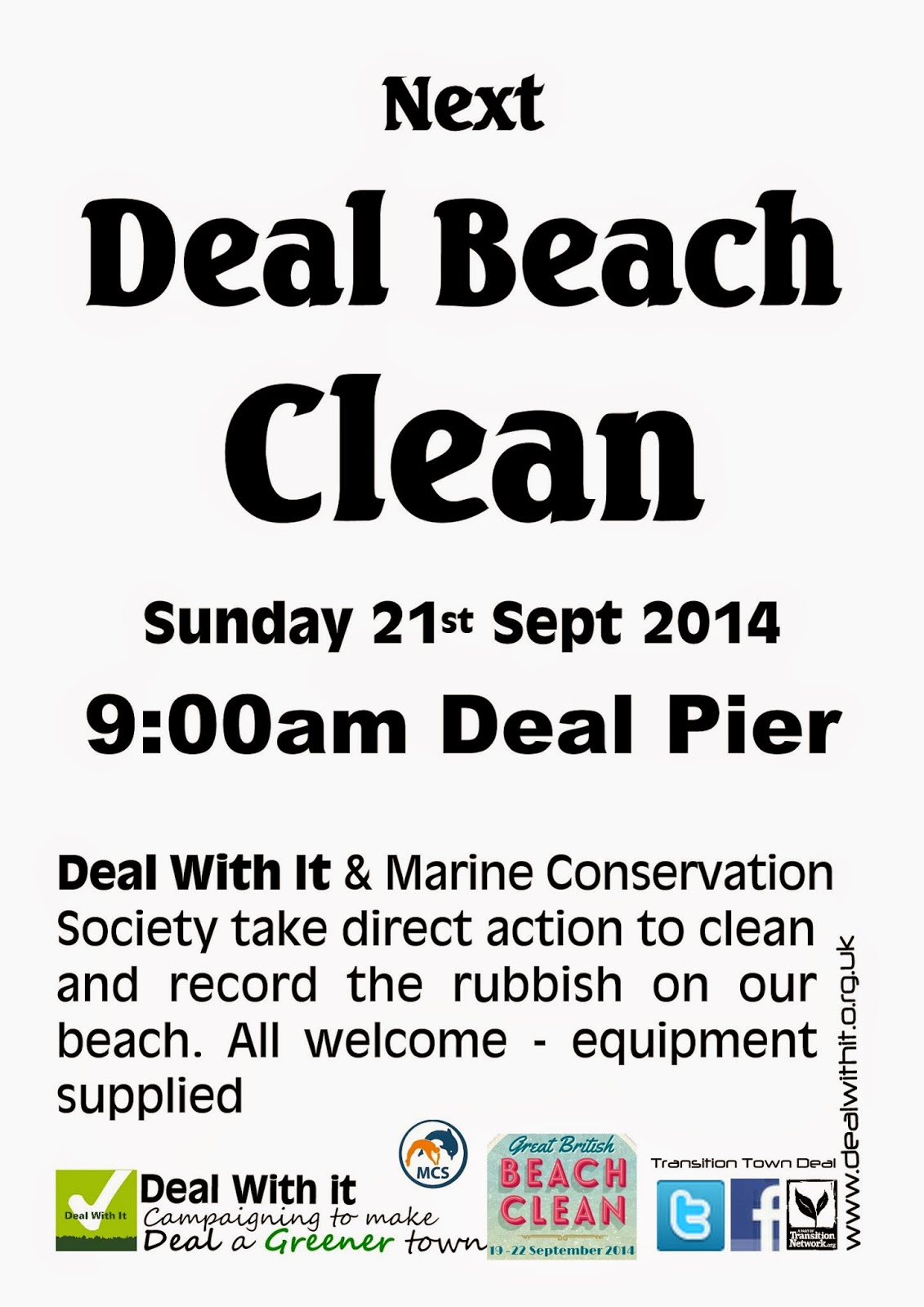 Deal With It, Deal’s local community Green group, next Deal Beach Clean this coming Sunday (21st September) is part of a nationwide campaign the ‘Great British Beach Clean’ this weekend.


The Marine Conservation Society (MCS) says it hopes to get a record number of people cleaning beaches around the UK during its Great British Beach Clean weekend. The Deal beach clean will be one of seventeen happening in Kent and about 400 around the country.

Tom Bell, MCS Campaigns Manager, says the event hopes to return many of Britain’s beaches to their halcyon days of the 50’s and 60’s, before we became a throw away society resulting in thousands of pieces of litter, including vast amounts of plastic, along every kilometre of the UK’s coastline.

“Our domestic habits over the last 50 years or so have resulted in dirty beaches. We throw more stuff away than ever. Plastic in the marine environment may take hundreds of years to break down and it washes up or is blown onto beaches in bits from micro pieces to larger chunks.

We flush stuff down the loo we shouldn’t, and that ends up in our water ways and then our beaches. We want to see people turning out to clean up their favourite or local beach during our Great British Beach Clean weekend – please don’t turn your back out beaches.”

Wendy Boorman, Deal Beach Warden said “This Sunday’s Beach clean is part of our regular work with the Marine Conservation Society (MCS), who tracks how rubbish is affecting our coastline. Every year rubbish, as well as being unsightly eyesore on our beaches, kills and maims local marine wildlife.

This Sunday’s beach Clean will start at 9am at the Deal Pier. Beach Cleans last for about one to two hours depending on what there is to find, numbers and weather. We supply pickers, gloves, sacks and the MCS logging sheets. The only thing volunteers need to bring is their enthusiasm and perhaps suitable dress for our weather.”

The truth behind the dash to gas - Astor 18th Sept 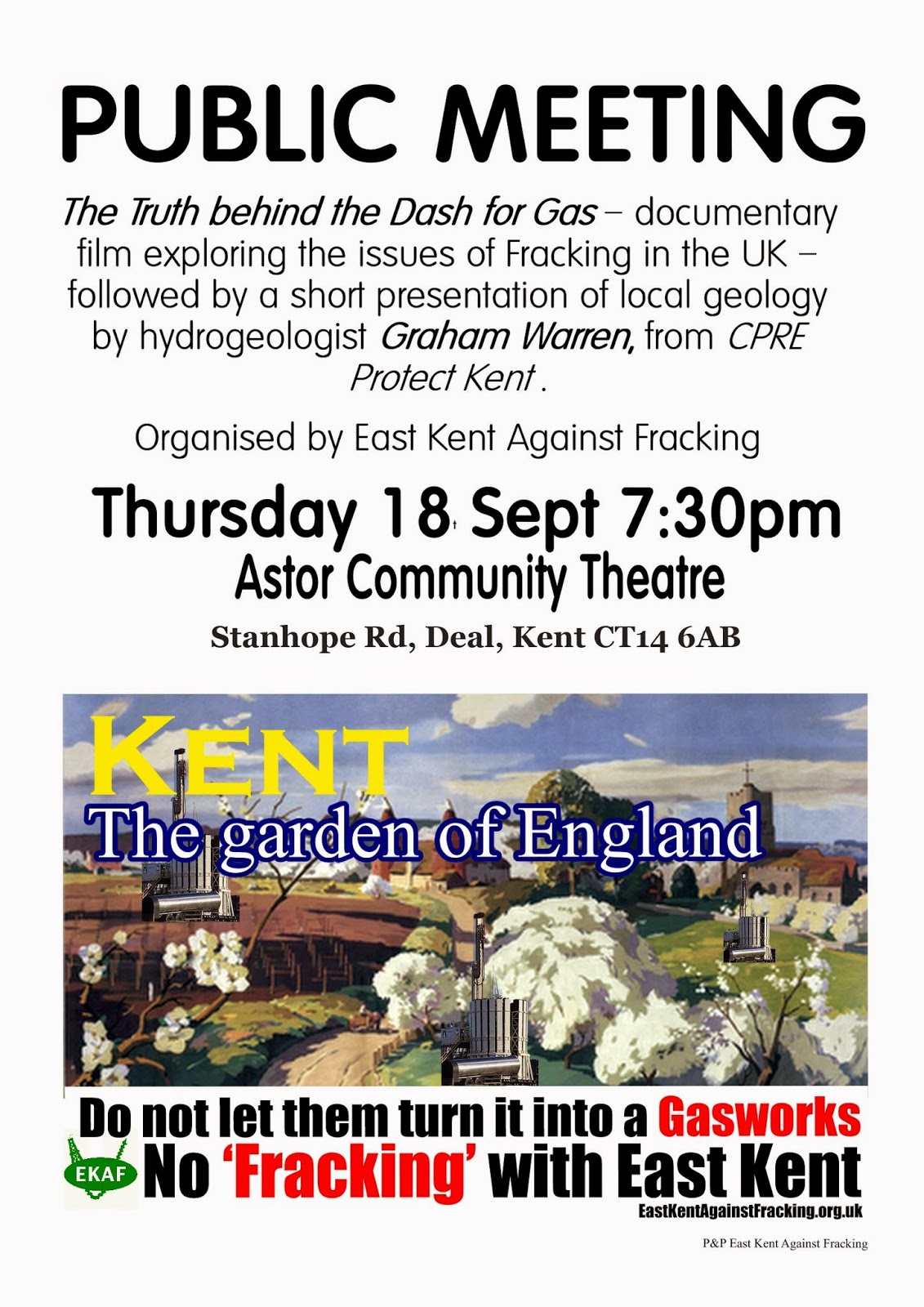 East Kent Against Fracking (EKAF) has organised a meeting at The Astor Theatre on September 18th at which the acclaimed documentary by filmmaker Marco Jackson, The Truth behind the Dash for Gas will be shown.

This will be followed by a short presentation by Graham Warren, a distinguished hydrogeologist and author of several studies on water resources in the South East, which will alert residents to the specific risks posed by the exploration for gas in the area of the former Kent Coalfield, highlighting the impossibility of protecting the aquifer which supplies the whole county with over 70% of its water.


This will be followed by Q&A session.

Posted by SteveW at 8:30 AM No comments:

Email ThisBlogThis!Share to TwitterShare to FacebookShare to Pinterest
Labels: fracking

Deal With IT's Secretary Victoria Nicholls writes a regular column in the East Kent Mercury :  What a furore! Have you ever heard such a fuss in your life? It was all over vacuum cleaners and similar electrical appliances and a new European Union (EU) directive.

Some sections of the popular press have had a field day, issuing scare stories that seem to have caused many people to go out and buy a new vacuum cleaner, whether they needed it or not!

So what is this all about? Simply an EU directive which will reduce the power of appliances but will not reduce their efficiency. Makers of vacuum cleaners, fridges, washing machines and televisions have known about this directive for years and have been working towards producing appliances that operate with less power, make less noise and cost less to run. Over the next few years, the power will be reduced on smaller appliances such as hair driers, toasters, blenders, and power tools so that they use up to 20-30% less electricity.

The whole idea behind this directive is, of course, to reduce Europe’s overall energy consumption. These new regulations are expected to save 19 terrawatt hours (TWh) of electricity by 2020. This amount of electricity is more than that generated by several British power stations and all our wind farms last year. This is only similar to the development of the motor car. Our present day cars have lighter bodies which do not rot and far more efficient engines which produce more power but use less fuel than ever before

Posted by SteveW at 7:30 AM No comments:

Gleaning near Canterbury on 13th September 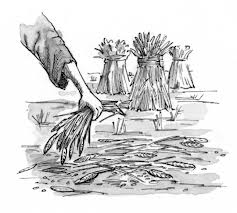 We’ve just discovered thousands of pears and plums going to waste, and need your help to rescue them for charity. We’ll be heading down to a farm in Kent to glean these tasty delicacies  next Saturday 13th September – hope you can join us!

Gleaning day on Saturday 13th September 10am-5pm (TBC):
Join the Arable Spring! Join us for an idyllic day on a farm in the Kent countryside, near Canterbury, saving literally tonnes of delicious pears and plums that would otherwise have been wasted for charity. All the food will be going to charities dealing with food poverty via our good friends FareShare in London. Travel expenses are covered for those travelling from Kent – just check with us first!

Please join us in the fields! If you can make it, please contact me at martin@feeding5k.org to confirm whether you can make the whole day, and send me your phone number and where you’ll be travelling from (e.g. Canterbury, other parts of Kent, etc.) so we can group you with fellow travel companions. We’ll then send you finalized details closer to the time. Please get in touch asap so we have an idea of numbers – the more people we have, the more fruit we can save! Also, please do check whether you can make it, as lots of drop outs at the last minute can jeopardise the gleaning day going ahead!

Please spread the word to your friends and networks, and do recommend any groups you think we should get in touch with!

See you in the fields!

Email ThisBlogThis!Share to TwitterShare to FacebookShare to Pinterest
Labels: gleaning

Deal With IT's Secretary Victoria Nicholls writes a regular column in the East Kent Mercury :  During 2013, more than £150billion has been invested in renewable energy schemes around the world. Wind, solar and other renewables now produce 22% of the world’s electricity and could be producing 26% by 2020, the International Energy Agency (IEA) reported last week.

The cost of production of renewable technologies is falling as manufacturing costs reduce but investors need to know that they will get a return on their money. All energy production is subsidised by governments and the present economic climate has caused the subsidisation of renewable energy to be criticised widely although this is an extremely short sighted approach.

Our ‘greenest government ever’ has chosen to invest in wind power, mostly offshore wind, but this is an example of putting all our eggs in one basket which never makes for a good result. Offshore wind is an expensive option because of high installation costs and onshore wind has many opponents, despite being the most economic way here in Britain. Power generation is a big subject and power generation by renewable technologies is also controversial. If we are to have reliable sources of energy for the future, low-carbon world which we need to create we must have a mix of technologies to take advantage of all the sources of energy that are out there. Wind blows more at night but solar energy is there during the day so a combination of the two is the obvious choice with bio-fuel, hydro, geothermal technologies and anaerobic digestion alongside.
Posted by SteveW at 8:40 PM No comments: