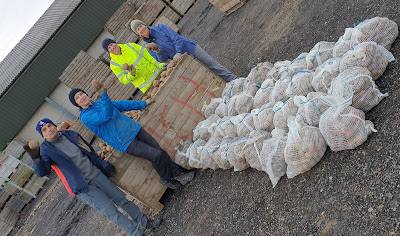 Potatoes and Broccoli about 1.2tons collected and distributed to local food charities:

Lots of thanks to our kind host farmer, Trevor Bradley at Boundary Rd Farm. 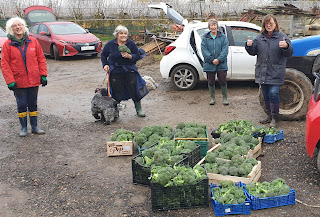 Posted by SteveW at 3:21 PM No comments:

Today, West St and Beach St leading on to The Marina provide the most "bends" - I find gloved hands to pick up are faster than the gadget, but bending down to gather 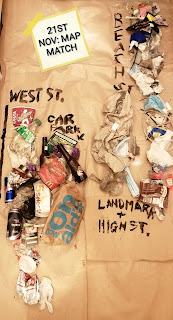 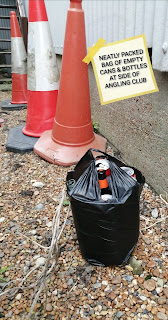 from the gutters doesn't make you many friends!

West St car park has been the picnic spot for McDonald's munchers.

I guess putting the bag of empties by the Angling Club is marginally better than leaving it on the beach.

Pity those picnickers didn't make it as far as a bin. 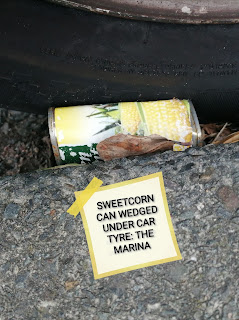 Posted by SteveW at 1:09 PM No comments:

Quick 240kgs potato glean today many thanks to farmer Trevor Bradley for hosting us.
Spuds gone to
gleaning@dealwithit.org.uk if you want to join us or a local food charity/voluntary group
Posted by SteveW at 4:30 PM No comments:

Thank you to our clean up crew who did a mega litter and tidy up at and around Deal Rail Station today .... Helen, Nick, Patience, Bob and Steve.

Please email cleanupcrew@dealwithit.org.uk as we need to manage numbers etc with LD2
Posted by SteveW at 5:06 PM No comments: 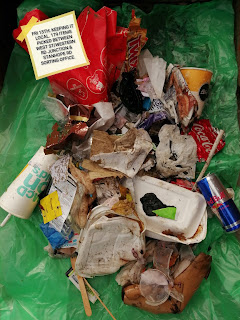 I decide to go to Stanhope Rd to post a card. Shall I wear my stinky gloves & take a dirty carrier bag - JUST IN CASE I see litter that needs picking?

Surely I'm not the only person who notices so much litter on our town centre streets?

I may well be the only one with stinky gloves & a dirty carrier at the ready for my short strolls to the High Street.
Helen C
CleanUpCrew@dealwithit.org.uk
#DealLitterDiary
Posted by SteveW at 1:27 PM No comments: 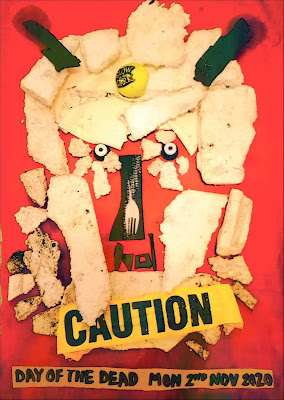 The start of November, and there is no detectable let up in the amount of litter on the streets of our town. Polystyrene, one of the world's most widely-used plastics, is abundant - pale green nuggets blowing & bobbing in puddles and today, partially smashed sheets of it with a painted skin binding it, adding weight. It becomes a temporary material for a creepy creation. 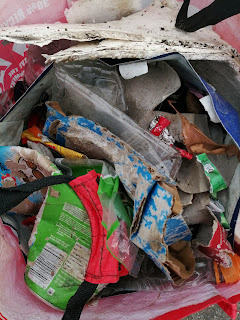 Inspired to pick up! 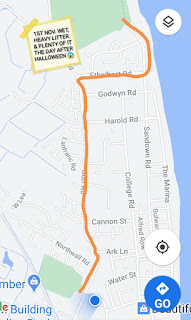 Big Thanks to David Bradley at Selson Farm for inviting us and the farm's donation to food charities:

If you want get involved or are a local community food charity please get in touch gleaning@dealwithit.org.uk

Posted by SteveW at 3:52 PM No comments:

Email ThisBlogThis!Share to TwitterShare to FacebookShare to Pinterest
Labels: gleaning


Response by the Friends of Betteshanger to the Cover Letter by Quinn Estates dated 29th October 2020 .

1. The proposals are still going to result in the loss of Turtle Dove territory as shown in 5.10.8 of the Ecological Appraisal of July 2020, submitted by Aspect Ecology and commissioned by Quinn Estates. This is what it says in relation to Turtle Doves:

“The fourth territory is located within an area proposed for development ….. The development will also result in potential for increased disturbance and predation of Turtle Doves associated with the residential housing and domestic pets. Accordingly whilst suitable Turtle Dove habitat will be retained … the proposed development could result in the loss of some territories.”

Although Woodland W4 is to be retained this is not where Turtle Doves were found. Turtle Doves prefer to nest in thick scrub rather than woodland. The Cover letter tells us that, despite the changes, 0.16ha of woodland habitat will still be lost. This includes the ‘fourth territory’ of Turtle Doves, mentioned above and shown on map 5805/EC04 in the Ecological Appraisal. There is no apparent plan to change the proposed development to avoid this.

2. It is important to note that Turtle doves return to the same territory year after year. This has been proved by RSPB research into Turtle Dove migration using tracking devices fitted to individual birds, as the following link will show.

3. It is not possible to solve the problem of ‘increased disturbance and predation of Turtle Doves associated with the residential housing and domestic pets’ by mitigation measures. Only protecting the site from development will do this.

4. Turtle Doves do not just use the Betteshanger site for nesting. It is a feeding area too. The RSPB link above, ‘A year in the life of a Turtle Dove’ shows a picture of a typical Turtle Dove feeding area. It bears a very strong resemblance to the Betteshanger development platforms with sparse vegetation, bare areas and seeds from the many flowering plants. This food source will of course disappear under the proposals.

5. So Turtle Doves will lose territories, lose a food source and be subject to disturbance and predation if the development goes ahead. They will doubtless abandon the site. And their precarious hold in East Kent will be further jeopardised.

The latest information from December 2019 about the status of Turtle Doves from the British Trust for Ornithology says the following: (see link below)

“The Turtle Dove’s demise is now almost total showing a 98% decline. This is the largest decline of any UK species and suggests that this once familiar bird will soon disappear from the British countryside.”

We reiterate our view that given the perilous situation of Turtle Doves in the UK it is totally unacceptable to destroy or disturb any Turtle Dove territory or build where the result could be an even further diminishing of their numbers. The only solution here and the only way to protect the Betteshanger population of Turtle Doves is not to build on the site.

However Turtle Doves are not the only species of great conservation concern that are going to be negatively impacted by the proposed development. There are also, for example, Grey Partridge, which the East Kent Wildlife group identified on site in the summer of this year, and believed to be breeding on the proposed development site.

The most recent Breeding Bird Survey report by the British Trust for Ornithology, the RSPB and the Joint Nature Conservation Committee shows that the number of breeding pairs of Grey Partridge have declined by 64% between 1995 and 2018 in the UK.

We maintain that the Local Planning Authority also has a duty to conserve the Grey Partridge, given that it is one of the fastest declining birds in the whole of Europe.

We maintain that is has a duty to conserve all the other Red and Amber listed bird species, the Reptiles and Amphibians, the Bats and Badgers, the rare Plants and Invertebrates all of which have taken up residence at Betteshanger, where habitats have been establishing and rewilding, largely free of human interference, for many years.

We maintain it has a duty to conserve a site that would be very likely to qualify as a Local Wildlife Site such is the richness and quality of its wildlife and habitats.

Sue Sullivan for the Friends of Betteshanger
Posted by SteveW at 6:01 PM No comments:

Email ThisBlogThis!Share to TwitterShare to FacebookShare to Pinterest
Labels: betteshanger

Great pumpkin glean with 2.2 tons collected by groups from Hythe, Folkestone and Deal.
About half of this has gone to the Felix Project in London to support London Foodbanks.

Big thank you to all volunteers and the staff at Pumpkin Moon farm nr Sittingbourne.

Posted by SteveW at 6:25 PM No comments: 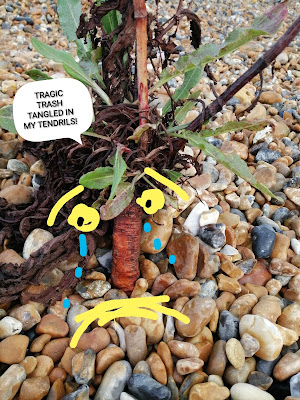 I haven't fancied picking sopping, dirty litter from my regular patch in this weeks downpours, so, against form, I step out to the beach. At least the plastic brought in on the tide will be clean!

What? No waste? Have the beach cleans & the regular pickers stripped the shingle of its debris?

Well, it depends where and what you're looking for.

Embedded in each and every clump of vegetation are dozens - hundreds - of pickable pieces. I shouldn't sound excited.

Seek and you will find. I recommend knee pads.
Helen c
CleanUpCrew@dealwithit.org.uk
#DealLitter Diary
Posted by SteveW at 6:15 PM No comments: