It is a long time ago – thirty years, in fact – since we first heard about the hole in the ozone layer above Antarctica. This was followed by serious fears that ozone depletion could cause harm to health and to the environment through ultraviolet light reaching the surface of the earth.
There was an unparalleled global reaction to these findings and in 1987, the Montreal Protocol, an international treaty, was ratified by all United Nations’ members to eradicate the use of chlorofluorocarbons or CFCs in products. These chemicals, once commonly used in aerosols and refrigeration, can remain in the atmosphere for more than 50 years. The phasing out of CFCs means that the ozone layer is slowly recovering and by September of last year there was a consistent shrinking of the size of the hole.
Britain has around 5% less ozone than it did thirty years ago but it would have been twice as bad by now if CFCs hadn’t been phased out. There would be damage to skin and eyes and also to crops. It has been estimated by the UN that 2 million cases of skin cancer per year have been avoided through this action.
This is a fine example of worldwide co-operation dealing with a worldwide problem in which we are all involved. It would be wonderful to think that global climate change could be tackled with the same enthusiasm throughout the world. The economics are certainly different because the fossil fuel industry involves billions of dollars.

Posted by SteveW at 3:49 PM No comments:

The year 2016 is on course to be the hottest year on record. There has been an amazing acceleration in global temperature rises, far in excess of that which scientists expected. These temperature rises show that climate change is no longer a threat for the future, it is here and now. Climate change deniers, please take note!

Each of the past 13 months has been the hottest globally on record for that month and the maximum extent of Arctic sea ice set a record low and the extent in May was the lowest for that month ever. India recorded its hottest day ever with the mercury reaching 51°C in Phalodi, Rajasthan and the temperature in Australia was 1.86°C above the average, beating the previous above average temperature of 1.64°C. The Great Barrier Reef suffered its worst coral bleaching, leaving only 7% untouched by devastating algal loss.

Carbon dioxide levels are almost entirely responsible for the record temperature increase but El Niño, a natural climate phenomenon, must take some blame as it causes stored heat to be released into the oceans, affecting the whole world.

These figures surely make the connection between cutting emissions and the impacts of global warming.

Posted by SteveW at 3:46 PM No comments: 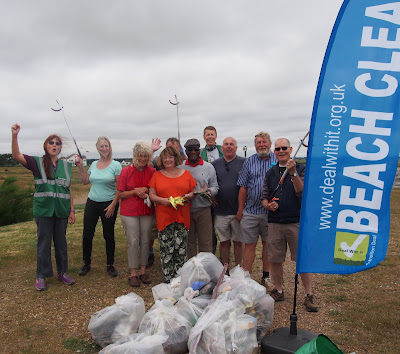 Our next Beach Clean will be on Sunday September 18th at 9:30am as part of the Marine Conservation Society's Great British Beach Clean - A  national survey of rubbish on our beaches
Posted by SteveW at 11:58 AM No comments:

We have heard a lot about poor air quality recently concerning our own cities, most notably London but these problems are nothing compared with Rajshahi in Bangladesh. Rajshahi has had the unfortunate accolade of being one of the world’s most polluted cities. This has been caused by dust blowing up from fields, roads and dry riverbeds combining with choking smog from brick kilns on the edge of the town and transport emissions.

A campaign to make the city greener began 15 years ago with a tree planting drive and now includes everything from rubbish collection to transport. Changing transport for greener options began in 2004 by altering the petrol/diesel powered rickshaws, which are the main form of public transport, for battery operated versions and by banning large lorries from the city centre during the day.

A campaign to clean up the brick kilns by changing the chimneys and fuel has reduced the pollution from them dramatically as has a project to make the city centre greener by reducing the amount of dust thrown up by people and vehicles. To ensure that dust is removed from the roads, pavements have been installed and surfaces have been grassed or planted. The city’s chief engineer who is responsible for all this improvement was inspired by visits to London and other cities around the world where people walk around the city instead of looking for transport.
His next project is to encourage cycling by installing cycle lanes to encourage a healthier lifestyle.
Posted by SteveW at 3:51 PM No comments: