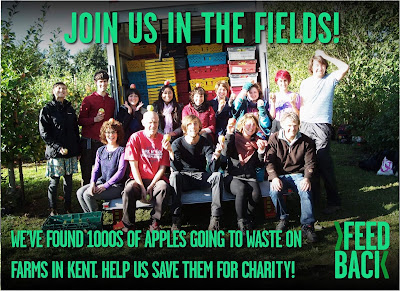 Please share far and wide! We’ve just discovered a HUGE amount of apples going to waste on 2 farms in Kent. This fruit are perfectly delicious and nutritious, so we're setting out to save as many as possible – and we NEED YOUR HELP. The more volunteers we have, the more food we can save!

On Monday 29th of October, 11am-4pm we’re inviting volunteers to a farm near Sandwich to harvest delicious Ida Red and Golden Delicious apples. On Wednesday 7th November we're heading to a farm near Canterbury to glean several varieties of apple. All of these fruits will then be donated to charities such as supply excellent charities such as FareShare and The Felix  with much-needed food.

So please join us for one or both of these rewarding and sociable days in the orchard. We’re especially welcoming 18-24 year olds to get out in the fields gleaning, though people of all ages are warming invited.

We cover travel expenses up to £12 per volunteer from Maidstone, Canterbury, Dover, and anywhere in between!

To join either of these gleans please sign up here: https://goo.gl/forms/g37LBTCzYj9dazwE3
You will then be sent more info about the gleaning day, closer to the time.

If you can't join us for these events, please do sign up to our gleaning list so we can let you know when gleaning days are coming up near you: https://actionnetwork.org/forms/join-us-in-the-fields-its-time-to-get-your-hands-dirty/
‪
If you'd like to know more about gleaning please contact kent@feedbackglobal.org (for Kent gleaning) or James@feedbackglobal.org (for UK wide gleaning).
#‎gleaning‬‬‬‬‬‬‬‬‬ ‪#‎foodwaste‬‬‬‬‬‬‬‬‬
---

* From Farm to Fork is an exciting collaboration between Feedback and FoodCycle, which will train more than 4,000 young people (18-24) to reclaim unharvested fruits and vegetables through gleaning, and to turn surplus food into delicious, nutritious three-course meals to be shared with vulnerable people. It is part of the Our Bright Future programme. The Gleaning Network is a Feedback campaign.
Posted by SteveW at 8:39 AM No comments: 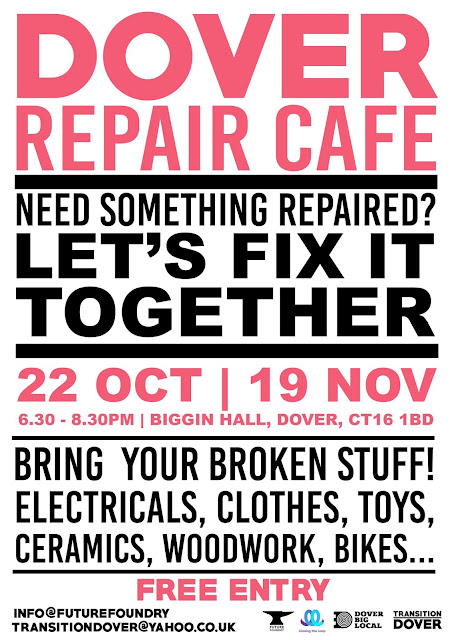 Posted by SteveW at 9:13 AM No comments: 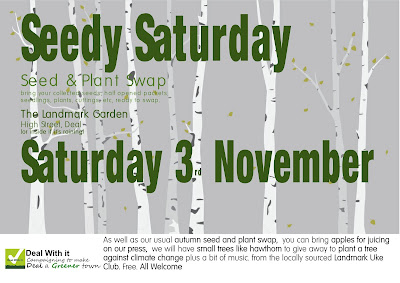 Our next Seedy Saturday at the Landmark Garden on Sat 3rd Nov will have a Autumnal feel to it.

As well as our usual plant and seed swap we with have our apple in working order (so please bring down some windfall apples and a container if you want to have a go) and Sue is arranging for some small trees (like hawthorne) to give away … fantastic idea as a response to the recent IPCC report on Climate Change.

all welcome and event is free
Posted by SteveW at 2:19 PM No comments: 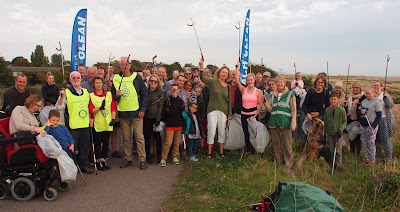 Thank you to our 60+ volunteers on today's Walmer Castle Beach Clean.

20 bags/89kilos collected with over a 1/3 recycleables inc 38 single use plastic bottles!

Our next Beach Clean is on Sunday 18th November at 9.30am meeting at Sandown Castle Community Garden 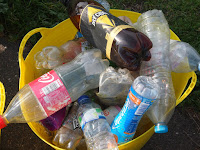 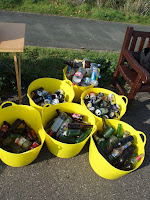 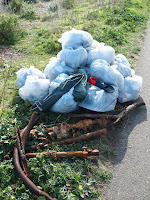 Posted by SteveW at 1:12 PM No comments:

Deal With It October Update

Another great turn out for our #GreatBritishBeachClean on the 16th September but will so many other local cleans happening at the same time Samphire Hoe, Dover, St Margarets, Kingsdown and Pegwell Bay.


Deal has won Gold award again for SE in Bloom town award which our gardening projects and cleans support.


Deal Station Gardeners and Clean Up Crew. The monthly clean ups have been scheduled thru to next March. Good meeting with South Eastern and National Rail on a number of issues relating to the garden and rubbish at the station station@dealwithit.org.uk


Plastic Free Deal news … Walmer Parish Council have agreed to support. We are currently arranging a Steering Group Meeting at end of October. Contact PlasticFreeDeal@gmail.com if you want to get involved or your business would like to support


Deal Hop Farm – Another amazing year with 178 kilos of hops harvested over 4 days in September with some 350 people involved locally in the project. The Green Hop ‘Hopping M.A.D – Made Around Deal’ is local pubs now (Berry, Lighthouse, Freedman, Just Reproach). As the group have also dried some hops this year there will be a 2nd beer in December. DHF has its Oktoberfest on the 27th Oct. info@dealhopfarm.org.uk


Landmark Garden – A lot of awards this year: The highest level in the RHS ‘In Your Neighbourhood’, we came second in the Kent Life Community Garden awards and won a Silver in the Kent Wildlife Trust ‘Wild Gardens’.


Captain’s Garden Deal Castle – Weekly sessions at the garden on Tues and Thurs from about 10.15ish to 12ish. Projects extending the hop garden, rebuilding shed, setting up composting bins as well as gardening 😊 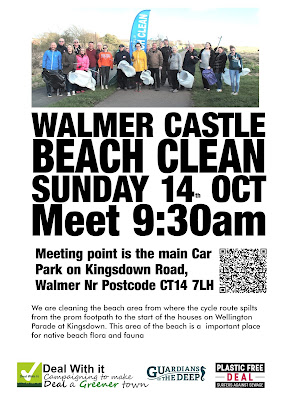 Posted by SteveW at 2:33 PM No comments: