Joint Deal With It / Dover UNA report back meeting from the
COP21 Paris conference on Climate Change
from local attendees from Dover/Deal area - all welcome. 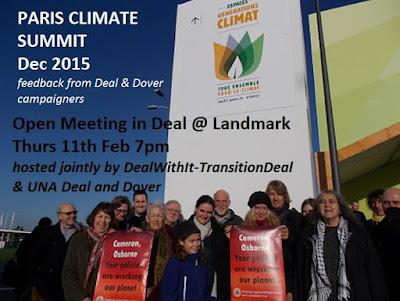 Posted by SteveW at 5:55 PM No comments:

Email ThisBlogThis!Share to TwitterShare to FacebookShare to Pinterest
Labels: COP21

Nobody would argue with the fact that the Port of Dover has a good plan for the revival of the Western Docks and with it, hopefully, the rejuvenation of Dover itself. It cannot be denied that the jobs created by this scheme would be welcomed with open arms in Dover. But – there has to be a ‘but’, doesn’t there? – the plan to dredge the Goodwin Sands to accomplish this development is a step too far.

Does it seem sensible to anyone that an area as sensitive as the Goodwins, which has been designated as a Marine Conservation Zone, would be an area which would be suitable for dredging aggregate to be used for the Dover expansion?

The Goodwin Sands are well known to the local populations of Deal and Dover as an extremely important area for wildlife, both above and below the water. There is a large seal population which depend on the sands where they can leave the water to have their pups and to moult. Peak season for pups is July and moulting time is August. The Goodwins were also recommended for protection for the diversity of its sediment habitats, where there are blue mussel beds and rossworm reefs.

We must not forget, of course, that the Goodwin Sands are a very dangerous stretch of coastal water, responsible for thousands of shipwrecks which still lie out there. In the great storm of 1703, ninety vessels were thought to have been lost.

We must remember that the Sands have been dredged before; the last time in 1998 and the area is still recovering. Seals numbers are now in the hundreds so any work on the Sands will disturb them, particularly since if dredging occurred it would start as early as August this year when the seals have pups and are moulting. Dredging in this phase would end in November 2017.

The Port of Dover is quick to explain that the Goodwins are a favoured source of aggregate because they are close by, limiting carbon dioxide and nitrous oxide emissions and road transport congestion. As Dover is a port, would not transport by ship be a more environmentally friendly solution?

Consultations between the Port of Dover and Kent Wildlife Trust, the Marine Conservation Society and British Divers Marine Life Rescue are continuing and we can only hope that the right decisions are made.

So, Dover, please source your aggregate from elsewhere!

Thanks to everyone who came to our Organising Group meeting today at the Landmark Cafe.
Lots to do in 2016. We are postponing the AGM on 30/1 to probably the 20th Feb as we are trying to get a speaker on the Goodwins.
Next OG meeting which is open to all is on 13/2 10am.
Deal Station Garden Group meeting on 31/1 3pm at sonja's.
First Seedy Sat will be on the 12/3 and we have beach clean's on 21/2 Deal and 13/3 at Walmer.
Lots of work supporting Deal's entry into SE in Bloom ... ideas on wildlife day at the Garden
Trying organise a joint meeting with UNA on COP21 outcomes. Plans for permaculture garden at chequers... expansion at the Landmark Garden
Working with Kent Wildlife Trust for research/feedback on MCZ poss on 6/2 ... Love to Sue Delling who is on the mend ....
Mailing and details out on website/FB over the next week or so

Scientists and meteorologists warned us twenty years ago that our winters would become warmer and wetter. This has come true except for a few cold spells now and then but did we take any action to cope with the ever increasing amounts of water that would land on our fair country? No, of course we didn’t. In fact, we allowed actions to continue that would positively make the flooding of towns far more likely.

As usual, we hear about building higher walls, putting in flood defences and dredging rivers but we don’t hear much about putting in measures to hold back the water at source on the moors above the towns.

Campaigners have been begging the government to stop the drainage and burning of grouse moors which reduces the grounds’ capacity to store water. But large, important landowners hold sway and continue to destroy the land in favour of breeding game birds for people to pay money to shoot. To add insult to injury, farm subsidies are paid to these landowners because their land qualifies as farm land as soon as any wildlife habitat is removed.

We need flood prevention in the form of woodland and functioning bogs; dead wood and gravel banks and other obstructions which beavers would gladly create for nothing. The effects of this would be to allow rivers to meander and braid, letting rivers flow again into their flood plains.

It seems that there are signs that the government has realised that these measures are a necessity.
Posted by SteveW at 8:30 AM No comments:

Gary Holmes who is a British Cycling Level 2 Road, TT & Track Coach, and his son George, International race technician and CYTEC Qualified Cycle Mechanic, are hosting the first of what we hope will be many RouteOne Cycling Clinics on a variety of topics, based at RouteOne Cycle Cafe, Beach Street, Deal on Sunday 24th January at 14:00.

First off will be the subject most requested by fellow cyclists, how to fix that puncture, change the inner tube quickly and how to avoid punctures in the first place. We will be looking at what equipment you should carry with you to fix the problem, race scenario problems with some practical demonstrations.

We are limited to around 20 places inside the cafe, and you will need to bring your bike or a wheel as this will be a workshop where you will get your hands dirty! Places on a first come first served basis by looking at our Facebook Page and leaving your name.

There is no charge for this Clinic, but the Cafe will be open so you can buy refreshments throughout the 2 hour duration.
Posted by SteveW at 7:31 PM No comments:

Marine Conservation Zone between Dover and Deal comes into force 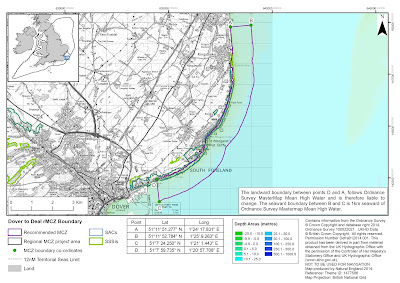 The Government has announced 23 new marine conservation zones around the UK's coastline. One of these will be the area between Deal and Dover.


There is also one between Dover and Folkestone.

Port of Dover considering dredging the Goodwin Sands for development 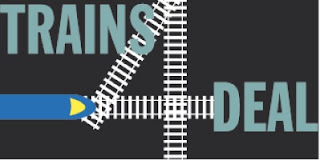 
full details at Trains4Deal site
Posted by SteveW at 5:41 PM No comments: