We see many articles written and many reports asking about how the growing population of this planet is going to feed itself in the years to come. There is even talk about us eating insects as a source of protein – how gross is that?

We seem to have little influence over the human population of the world or if we have, it takes a long time for these influences to come to fruition when we can see women able to control their own fertility and so improve their family’s lives.

What we do have influence over and can do something about immediately is the number of animals reared for food in the world. Livestock numbers are increasing by about 2.4% per year – that is twice the number that the human population is increasing.

Raising these animals for food uses three quarters of the world’s agricultural land; a third of our cereal crops are used to feed livestock. Soya is now being grown to feed animals on cleared forest and savannah land in South America leading to more climate change. If we decided to eat the soya rather than the meat produced from animals, the amount of land cleared to supply us with the same amount of protein would reduce by 94%. Livestock farming creates about 14% of the world’s greenhouse gas emissions.

If we ate less meat, our environmental impact would decrease in line with the incidence of heart disease, strokes, diabetes and cancer – worth thinking about, surely?
Posted by SteveW at 3:32 PM No comments: 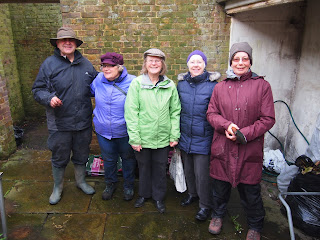 A big thank you to our six volunteers who braved the weather today to give the planters at the Deal Station a good tidy up. There is another session on Monday morning.

Thanks to Jill, Sonja, Roisin, Sarah, Alan and Steve.

We have put a planning session for the garden in 2016 on Sunday 31st January 2016 3:30pm at Sonja's (off London Rd) email Sarah for details at Station@dealwithit.org.uk

Posted by SteveW at 6:03 PM No comments: 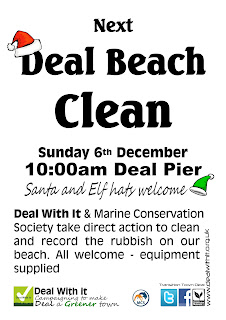 This one will be a pop-up one (we will not be logging the rubbish) and all Santa and Elf hats are welcome (as long as worn responsibly).

Hope to have some drinks and festival cakes

All very welcome
Posted by SteveW at 8:30 AM No comments:

A new nuclear power station is being built at Hinkley Point in Somerset; this is the first nuclear plant to be built in Europe since the disaster of the Fukushima reactor melt down in Japan in 2011. This suggests that the rest of Europe, and certainly Germany, do not believe that nuclear energy is the most reliable form of generation and are opting for renewable sources instead.

Germany has chosen to switch off all nuclear reactors by 2022, partly in response to anti-nuclear protests in the 1980’s, and to use renewables to make up the shortfall. They have called this process the energy transition. Currently, 26% of Germany’s electricity comes from renewables in the form of solar, wind, and biomass but it must be said that 44% is generated by coal. The government wants to increase the renewables’ share to 40%-45% by 2025.

The Hinkley Point nuclear plant is going to cost electricity customers at least £4.4 billion in subsidies while our government has cut subsidies for solar energy on the grounds of cost! The nuclear industry has been promised energy prices at twice the market price for the next 30 years. Crazy or what?

Germany’s choice to go for renewables has helped to create jobs. About 370,000 people work in the renewables industries, about twice as many as in fossil fuels. The town of Bremerhaven has benefitted from the establishment of a wind turbine manufacturer employing 350 people after suffering from the collapse of the fishing and shipbuilding industry. 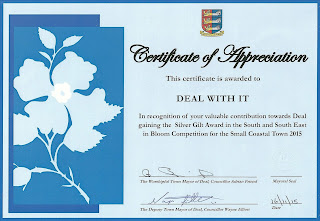 Deal Town Council recognised Deal With It's volunteers contribution to the town success in this year's SE in Bloom at a gathering at the town hall on Monday.

The informal gathering with the mayor awarded certificates of appreciation to the many organisations, individuals, businesses and community gardens who had supported the Town's bid in this year's SE in Bloom.

Deal With It was recognised for the projects at Deal Station Garden and the Landmark Community Garden on Deal High St.

Posted by SteveW at 9:19 PM No comments:

Many thanks to Jayne at PR Films for her latest video on one of our Seedy Saturdays. This one was at our Bee Fest special back in September


Link for the video if you cannot see it here
Posted by SteveW at 9:08 PM No comments:

It is difficult to realise how our actions can affect other people and other species, often many miles away. Now the effects of global climate change are causing problems for species on our doorstep.

If you have been lucky enough to see at first hand or have only watched its antics on television, you must agree that our little seabird, the puffin, is a joy to watch. So it is very sad to hear that Atlantic puffins have been added to the International Union for Conservation of Nature (IUCN) red list of species in danger of becoming extinct. This puts them at the same risk as the African lion and elephant, and in more danger than the humpback whale.

While there has been a crash in Atlantic puffin numbers in Norway, Iceland and the Faroe Islands which together hold 80% of the European population, there have also been significant losses on Fair Isle and Shetland, though numbers are better in other places.

The birds face a long list of threats. Research has shown that puffins are particularly susceptible to changes in sea temperatures and extreme weather conditions which affect their prey species of sand eels, sprats and other small fish. Certain types of net fisheries trap puffins; invasive predators such as rats, cats and mink on islands where they nest have all contributed to this disastrous decline.

It is disturbing to think that many of our familiar wading birds are also considered to be ‘near threatened’.