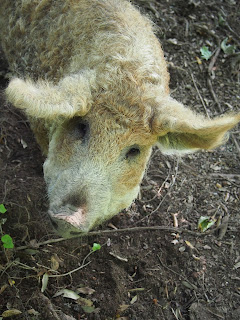 Deal With It Supporters spent a great day today seeing the Woolly Pigs at the Pines Calyx at St Margarets at Cliffe.

The three Pigs are Mangalitsa variety and are being used by the Centre to clear woodland prior to building some eco-Chalets. They are clearing about  a football pitch in a fortnight

The Pines Calyx is looking very good - the lovely flowering artichokes were my favourite.

see all the pics here

Thank you Tracy for arranging...
Posted by SteveW at 7:17 PM No comments: 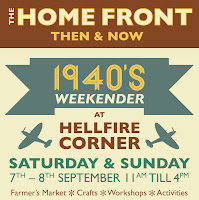 Calling all volunteers! We need you!
We are an environmental education charity based in St Margaret’s Bay, Kent. http://www.thebaytrust.org.uk/
We are looking for a group of volunteers to help start our WWII garden.
This will be a working garden with three main objectives: providing fresh food for the Tea Rooms, be an addition to the WWII Museum: Hellfire Corner and become a teaching tool for school groups.
We would like to make a start on it to entice potential regular volunteers at our Home Front 1940s Weekender on the 7th/8th September. https://www.facebook.com/events/480673945362082/                   http://www.pinesgarden.co.uk/
Garden Blitz: Wed 28th – Thurs 29th August 9.30am – 5pm (lunch and travel expenses covered – speak to Poppy)
Will involve mostly digging, shovelling earth, manual work.
If you are available to help on either day, please contact Poppy on poppy@baytrust.org.uk or call 01304 852790/851737
Poppy Jackson
poppy@baytrust.org.uk
T: 01304 851 737 or 01304 852 790
The Bay Trust
Posted by SteveW at 8:10 PM No comments:

Our colleagues at the Pines Calyx have a '40's Weekender' coming up over the weekend of 7/8th September .... start digging for victory now! 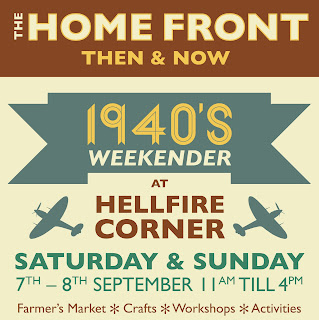 Deal With IT's Secretary Victoria Nicholls writes a regular column in the East Kent Mercury: ‘Biogas’ does not seem a very interesting subject on the face of it. The debate about fracking has concentrated minds on shale gas and totally ignored the cheaper energy producing option of gas from waste. Commentators are keen to point out that the UK will need a source of gas to keep the lights on while we move to a low carbon, and eventually, a zero carbon economy, when renewable will be our main source of energy.

Anaerobic digestion techniques using waste food are well established around the world. The UK throws away about 15 million tonnes of food waste per year but only about 1 million tonnes are used to create biogas. Some 90 tonnes of animal waste is also produced in the UK, along with gas from sewage treatment plants, all of which could be used to supply homes. Estimates show that at least one in twenty homes could be supplied with biogas by 2020.

Using all this gas could save the UK at least 7.5 million tonnes of carbon dioxide a year because the waste that would otherwise go to landfill would produce methane as it decomposes, an even more dangerous greenhouse gas than carbon dioxide.

The biogas sector could create at least 35,000 jobs with the necessary investment – between 2010 – 2011 there were already 2,600 jobs – but there is only a small fragment of the required construction underway.

The dangers of fracking are well documented but biogas technology could help solve our energy requirements and our waste problems.
Posted by SteveW at 11:10 AM No comments:

Deal With IT's Secretary Victoria Nicholls writes a regular column in the East Kent Mercury
There were two contrasting stories this week concerning our long winter and late, cold spring; one good and one bad.

The good news is the report that one of our vineyards in Surrey is expecting a bumper harvest this year with vines already heavy with fruit. The cold winter got rid of all the bugs but during April, which is a critical time for vines, there was no frost so that the vines flowered in June. Now the mini heat wave is baking the soils of Surrey which should lead to a record crop later in the year.

English wine has become renowned for its quality and 4 million bottles are being drunk each year and easy availability from the supermarkets is a big plus.

A very sad story this week is about our barn owls. This beautiful bird, one of our most favourite, has suffered dramatically from a run of extreme weather events since 2009. The British Trust for Ornithology (BTO) has reported that there has been a 280% increase in reports of dead barn owls in March and many of them had starved.

Last year, after very good weather in March and early breeding, continual rain in June meant that many owlets died because the parents could not hunt in the wet weather. The last straw was the heavy snow fall in March this year, leading to the worst breeding season for 30 years.

This shows just how dependent we are on our weather, despite all our technology.

We had a good time and stall at the Walmer Picnic on the Green today. Lots of interest on our community garden projects, fracking and our Green Energy Fair in October

Sarah brought down a bumper tray of veg from the Deal Station Garden which went down very well and attracted a number of donations.

Thanks to Vicki, Charles, Sarah, Rosie and Steve for staffing the stall.

Thank you to Walmer Parish Council for inviting us

Posted by SteveW at 7:49 PM No comments:

Deal Walking Festival 22-28th August... Get your boots on now!

Over twenty walks are being led by experienced walk leaders who will guide you through delightful countryside around the Deal area. Many of our walks start from Deal itself or are connected by bus routes, giving walkers the delights of a countryside view followed by a walk along well trodden paths, often with a stop at a relaxing hostelry on the way back. What a way to spend a holiday break!

The Deal Walking Festival, founded by Alan Sutton six years ago, is now being organised by the White Cliffs Ramblers. This year sees a major expansion in the festival, with a much fuller programme which we hope will meet the diverse needs of local walkers and visitors to Deal. Whether your need is for a demanding yomp or a leisurely interest stroll, you're likely to find just what you need in our greatly expanded programme of festival walks.

http://www.dealwalkingfestival.org.uk/
Posted by SteveW at 9:00 AM No comments: 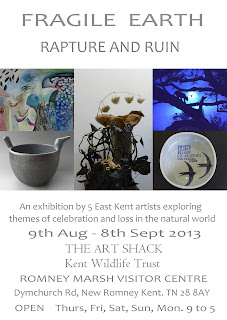 5 EAST KENT ARTISTS WHOSE WORK  CONCERNS THE LOSS OF  OUR NATURAL WORLD AND THE CELEBRATION OF ITS BEAUTY ARE TAKING PART, ADRIAN AND SUE SULLIVAN, AMANDA THOMPSON,DAVID WHITE AND MARILYN WILLIAMS.
PLEASE NOTE THE EXHIBITION IS OPEN THURS TO MONDAY EACH WEEK TILL SUNDAY THE 8th SEPT.. 9 to 5pm
FOR  FURTHER INFO PLEASE CONTACT......ADRIAN O on 07840 357062
Posted by SteveW at 2:46 PM No comments:

Email ThisBlogThis!Share to TwitterShare to FacebookShare to Pinterest
Labels: art 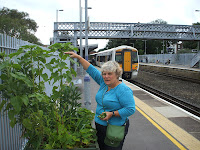 The Deal Station Garden is proving to be very productive - our gardeners have harvested several pounds of broad beans.

The groups plans to expand the garden later in the year once it discussed its plans with SE Railway.


If you would like to get involved, donate plants or dosh please contact sarah or alan on 01304 389 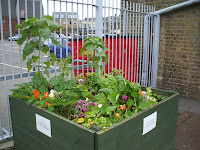 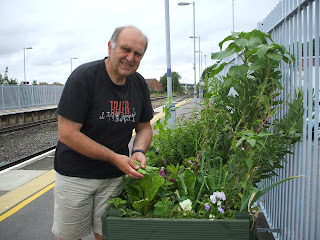 Posted by SteveW at 2:02 PM No comments:

Kent has been named as one of the major beneficiaries of an additional £37 million in national funding to increase the number of charging points for electric cars.

Meanwhile, Dartford Borough Council was successful in bidding for £125,000.

The South East Coast Ambulance service (SECAmb) also secured funding with £60,000 for this year and £37,500 the following year.

The announcement was made by business minister, and Sevenoaks MP, Michael Fallon and transport minister Norman Baker.

The money will be used to provide charging points to enable greater uptake of the new breed of environmentally-friendly cars and hybrid vehicles which need to be plugged in to charge up rather than be filled with fuel in the conventional way.

There will be the chance to secure further funds later this year too, when the second round of funding is announced - the closing date for bids to which is October 30.

This week’s announcement comes hot on the heels of an extra £500 million being committed to drive forward the market for ultra low emission vehicles, as part of the government’s plans for roads reform published in July.

Transport minister Norman Baker said: “With new models coming to market every month from major motor vehicle manufacturers and running costs of two pence to three pence a mile, these vehicles are an increasingly attractive option for many consumers and businesses.”

Mr Fallon added: “The Coalition government will provide 75 per cent of the cost of installing new chargepoints.

“The £37m funding for the package comes from the government’s existing £400m commitment to increase the uptake of ultra low emission vehicles and is available until April 2015.”

Kent County Council is set to create a further 75 publicly accessible charging points as a result of the funding.
Posted by SteveW at 8:22 PM No comments:

We are again facing the threat of fracking here in the South East. The West Sussex village of Balcombe is the centre of energy company Cuadrilla’s attempt to start an exploratory drill for oil which will result in hydraulic fracturing (fracking) techniques for extraction.

Protestors had succeeded in stopping Cuadrilla setting up its equipment on Thursday but on Friday police moved in and removed them to allow a generator on to the site.

Some weeks ago there was a sell out showing of the film ‘Drill, Baby, Drill’ at the Empire Cinema in Sandwich. This film is about the fight by villages in Poland to stop Chevron Oil and Gas Company from fracking for shale gas. The villagers won this battle and this can only encourage protesters in this country.

Our ‘greenest government ever’ has announced tax incentives for companies to frack for shale gas, incentives that could mean that renewable energy industries lose out because of cuts in subsidies.

Shale gas is not a ‘green’ option. Shale gas produces the same amount of carbon dioxide as North Sea gas when burnt in power stations, far too much if we are to keep our emission levels down to give our planet a chance to halt climate change.

Victoria Nicholls. Transition Deal.
Posted by SteveW at 9:00 AM 1 comment: