Our ‘greenest government ever’ is in the middle of an argument between those members who want to boost investment in renewable energy and other green technologies and others who believe these measures will push up prices and damage the economy.

David Cameron once said that ‘climate change was the greatest challenge facing mankind’ but he has done little in his two years in power to put in place measures to tackle it. Foreign secretary, William Hague, has urged the Prime Minister to give more help to green industries to boost the economy and to put us into the forefront of environmental technology. He also has support from other cabinet ministers and the government is under pressure from its own MPs to do more to generate jobs and improve competitiveness.

Unfortunately, there is a group of MPs and ministers who short-sightedly believe that low carbon energy will only push up prices instead of protecting the UK against increasing oil prices and dependence on foreign gas supplies.

We heard recently that Vestas has abandoned plans to build a factory in Thanet which would have produced blades for wind turbines for the North Sea. The reason for this is that Vestas has not received enough orders for its products in the face of concerns regarding the removal of government subsidies. This has cost 2,000 jobs in an area which desperately needs the rejuvenation that this factory would have brought.

Let’s hope that common sense prevails and those jobs will be forthcoming. Victoria Nicholls. Transition Deal.
Posted by SteveW at 7:11 PM No comments: 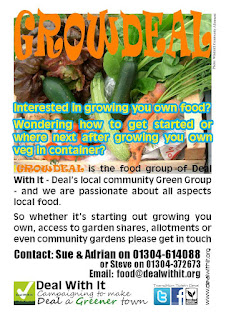 Deal With It are doing a bit of sowing this month.

We want to encourage as many people as possible to have a go at growing their own fruit and veg.

This is part of our Local Food theme and the idea is over the next few month we will get together in gardens and at our garden shares to demonstrate the practical steps in growing your own and the options & positive impacts this can have on local community
Posted by SteveW at 2:05 PM No comments:

Email ThisBlogThis!Share to TwitterShare to FacebookShare to Pinterest
Labels: Food

Hope to see you at the next Cycle Forum meeting, on Tuesday 3rd July 7.30-9pm, which is open to anyone interested in cycling in the Dover District.

The venue, as before is  North St Deal at Cavendish House, North St, Deal CT14 6NA (Tom Rowland's house) in the corner of Alfred Square (Thanks again Tom).

MINUTES of the last meeting will follow, and the AGENDA will include:
- a discussion of what practical steps we can propose to encourage local people to cycle to the shops as part of our support for the Deal Mary Portas bid to revive the High St.
- progress on the seafront and NCR1

Last month we asked your opinion on possible timetable changes for the three direct HS trains from Deal and Sandwich in the mornings in the Dec 2012 timetable: should they drop the 05.56 in favour of a new 07.26?

Your detailed feedback resulted in KCC signing a contract with Southeastern to pay for the first 3 trains to run as now (05.56, 06.24 and 06.56). On balance it was felt important that the core of regular travellers on the early trains should be able to rely on those services continuing while numbers built up.

But your replies did show strong evidence of demand for that new 07.26 service to arrive at St Pancras at 08.49.

Your observations via Trains4deal on how useful this later train would be persuaded Southeastern to consider running this 4th morning train as well, as a commercial service. They say "subject to costs we'll also look to operating an additional 07.21 departure from Sandwich".

Hope that's good news! ....and of course we'll need your continuing support as we work towards getting a full service included in the new franchise

Email ThisBlogThis!Share to TwitterShare to FacebookShare to Pinterest
Labels: trains4deal

June DWI meeting: Getting Around - Safely+Sustainably

The next Deal With It Meeting will be local transport with a focus safety & sustainablity.

A great opportunity to hear about developments in Sevenoaks and Sandwich that help car users and pedestrians enjoy shared access to the town centres we love, also a chance to check out the new more direct no 12 Deal to Canterbury bus route, get help to sign up to car share web-sites, and check out information from SPOKES – the Kent cycling group.
Posted by SteveW at 10:23 PM No comments:

In just under a week world leaders will gather for the Rio Earth Summit -- it's the biggest environmental conference in 20 years, and the UN is giving us the chance to put a proposal on the actual agenda for world leaders to discuss, but we have to vote by Thursday night.  Avaaz has submitted a proposal which has made it onto the top-100 list of recommendations that can now be voted by the public -- a plan to phase-out nearly $1 trillion in fossil fuel subsidies and invest them into a green future. If we make it to the top ten, world leaders will have to address it at the summit. For too long these gatherings have led to inaction and broken promises, but this time we can force international leaders to confront the indefensibility of one of the foremost causes of climate change -- fossil fuel subsidies. The deadline ends this Thursday night at midnight New York time. We’re sending this to some of the most active Avaaz members – let’s take 30 seconds now to vote and win! Click on the link below to vote now: http://www.avaaz.org/en/vote_for_the_planet/?bkKwJab&v=15169 Many proposals are on the table for the world's biggest environment summit in 20 years, but experts say one plan has the biggest chance for victory -- getting world leaders to end the nearly $1 trillion in subsidies that they hand out to dirty oil, coal and gas. It'll be a huge win for the planet -- it would level the energy playing field overnight, spurring a worldwide surge in clean energy. In the next week, bureaucrats from oil and coal-sponsored countries will try their best to delete any text in the negotiations referring to fossil fuel subsides. But this public vote gives us the upper hand, potentially allowing us to bypass the complicated negotiations and taking our issue straight to the discussion agenda of the heads of state. People power is on the march -- let's not waste the opportunity that the UN has given us to dictate the agenda for the biggest environmental summit in decades. Click below and vote now: http://www.avaaz.org/en/vote_for_the_planet/?
Posted by SteveW at 10:34 AM No comments:

Local Deal Artists and Deal With It supporters - Sue and Adrian Sullivan - are opening their sustainable and wildlife garden to show how easy it is to grow you own food.

They are are part of SEAS Open Studios showing the Sue's art and Adrian's photography. As well exhibiting their art they are providing home-cooked teas and brief talks on growing your own veg. Their open studio/open garden will run daily between 30th June and 15th July  www.searts.co.uk 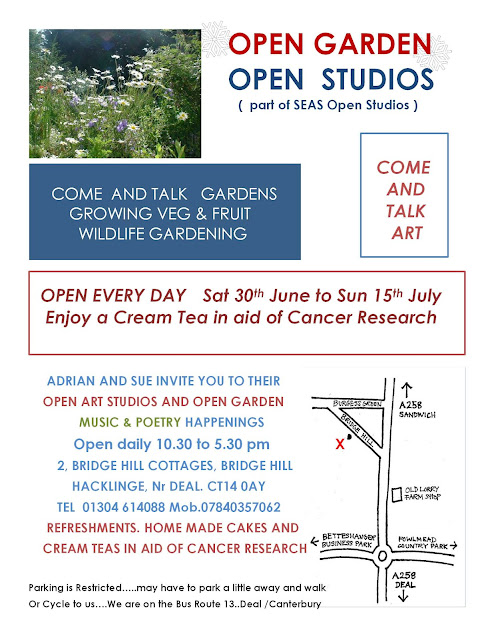 Posted by SteveW at 8:20 PM No comments:

Email ThisBlogThis!Share to TwitterShare to FacebookShare to Pinterest
Labels: grow

Deal With IT's Secretary Victoria Nicholls writes a regular column in the East Kent Mercury:
There was a most shocking story last week about one of our most magnificent native birds. Defra, in its wisdom, announced that it was going to allow the culling of adult buzzards and the destruction of their eggs because the buzzards had been killing game birds.

It was proposed to spend £375,000 of tax payers’ money on killing the birds and destroying their nests. Buzzards have been persecuted over many years and were almost extinct until their recovery began 20 years ago. It must be remembered that their populations are still low, dangerously so in some areas.

Pheasants, on the other hand, are a non native species, especially introduced to be shot for sport. Between 35 and 37 million birds are released each year: buzzards take 1-2% - a tiny amount compared with the 3 million that are run over.

Of course, making money must be blamed for this suggestion! There are people who willingly kill this most beautiful bird because it dares to live its natural life on land that they have claimed. They then raise millions of other birds for paying customers to shoot! – this is called sport.

There has been such a tremendous outcry from the public about this proposal and thankfully Defra has agreed to think again and will not allow this killing to go ahead. While this is great news, it does not mean that all is well for our buzzards or other birds of prey, which continue to be illegally slaughtered year after year.
Posted by SteveW at 5:58 PM No comments: 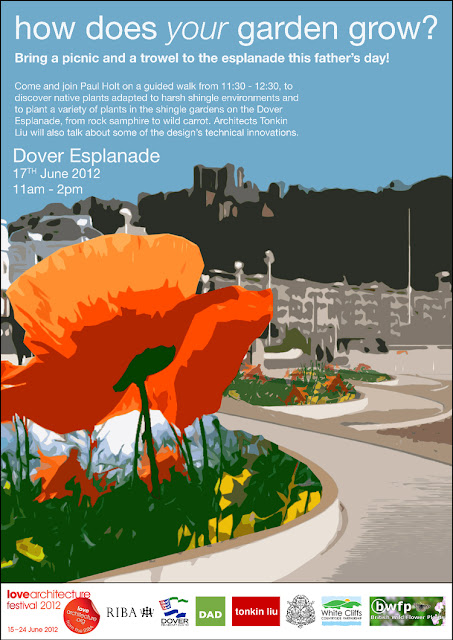 Posted by SteveW at 5:54 PM No comments: 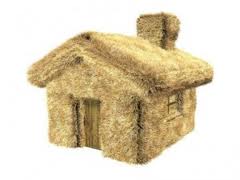 The first in a series of technical courses for industry professionals and their clients. The courses cover retrofit and new build sectors and address a number of key themes:

These courses will all be held at the Trust’s own outstanding example of sustainable construction - the Pines Calyx at St Margarets Bay.

The second series of courses are practical, hands on courses in sustainable building techniques and permaculture which cover:

Please see course information and book your place here: http://rippledown.com/eco-courses-kent/
Posted by SteveW at 7:54 AM No comments: