Thank you to our 45+ volunteers on today's Community Beach Clean at Deal Pier.

We collected some 31kilos of rubbish with 6kilos of stuff that can be recycled. This is a great total given that DDC had done thorough job early this morning.


Our next clean is two weeks time 7th July at 9:30am meeting at Sandown Castle end of the beach to support the work of the community garden there.

Our next beach clean is Sunday 23rd June at 9:30am meeting at Deal Pier. All welcome 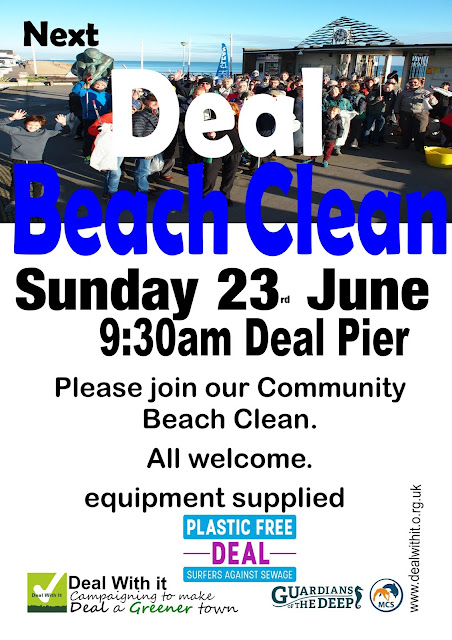 Posted by SteveW at 2:07 PM No comments: 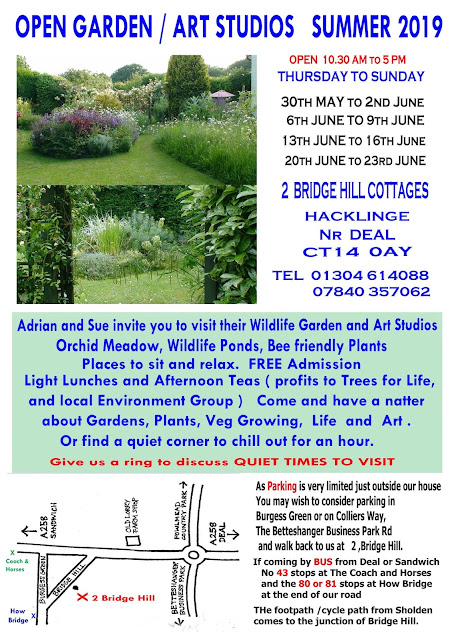 Sue and Adrian Sullivan have another of their popular open garden/studios sessions in June. A lovely garden designed on wildlife friendly and permaculture principals plus art, a bit of music and lashings of cake. Well worth a visit - Profits goes towards local environmental initiatives and trees for life

Posted by SteveW at 9:56 AM No comments:

Deal With It receives the Queen’s Award for Voluntary Service

Deal With iT – Transition Deal, Deal’s local green community group, has been honoured with the Queen’s Award for Voluntary Service, the highest award a voluntary group can receive in the UK.

Deal With It, which celebrated its 12th birthday earlier in the year organises the regular community beach cleans, supports the community gardens at Deal Railway Station, The Landmark Centre and Captain’s Garden at Deal Castle, Seed Swaps, green energy events, Bee festivals, tree planting, town litter picks, and has initiated a number of campaigns such as Plastic Free Deal and projects such as the Deal Hop Farm (a patchwork farm of 250 gardens & allotments in and around the town growing hops and producing beer with local brewers).


It is also the local partner for a number of national/regional charities such as Surfers Against Sewage, Marine Conservation Society, Kent Wildlife Trust’s Guardians of the Deep and English Heritage.

Deal With iT – Transition Deal is one of 281 charities, social enterprises and voluntary groups to receive the prestigious award this year, which is the equivalent to an MBE for a organisation.

The number of nominations and awards has increased year on year since the awards were introduced in 2002, showing that the voluntary sector is thriving and full of innovative ideas to make life better for those around them.

The Queen’s Award for Voluntary Service aims to recognise outstanding work by volunteer groups to benefit their local communities. It was created in 2002 to celebrate the Queen’s Golden Jubilee. Winners are announced each year on 2nd June – the anniversary of the Queen’s Coronation.

Representatives of Deal With iT will receive the award from the Viscount De L'Isle, Lord Lieutenant of Kent later this summer.

Victoria Nicholls, Deal With iT’s Secretary and one of the founding members of the group said “We are very fortunate to live in a town which is fuelled by the energy, commitment and creativity of so many voluntary organisations and people who want to make a difference to our community.

We are delighted that our small contribution to local environment and community has been recognised by this award; we see it as a tribute to all those have played a role in our various projects, events and campaigns over the last twelve years and especially the hundreds of people who have volunteered their time on beach cleans, community gardens, green energy events, making the town plastic free, seed swaps and even growing beer in the town!

Last year our various projects and events produced some 5,368 volunteer hours with some 1,902 volunteers involved – its great to think that all those local people can lay claim to small part of a shared MBE.

We would like to thank Dover District Council for nominating us for the award and the great support from Linda Ford at Sandown Castle Community Garden & Mark Brent from English Heritage at Walmer Castle in supporting the nomination.


Given the linked challenges of the mounting climate crisis, the tide of plastic in our seas and endangerment of so much of our animal and plant life, it’s so important that we take urgent action at every level, especially here in our local community.”


The next Deal With It event is the community beach clean on Sunday 23rd June at 9.30am meeting at Deal Pier.