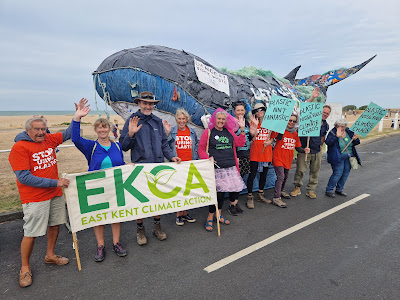 Formed in spring 2019, we are a loose-knit non-political grouping of concerned individuals in Deal, Dover and surrounding area who came together out of an urgent need to DO SOMETHING to ameliorate the ever-worsening global threats of:

We were very much involved in getting Deal Town Council to declare a state of Climate Emergency, and continue to work closely with them. We campaign locally, and participate in Kent, national and international initiatives.
Our aim is to increase public awareness of the urgency of the threats facing us, and to lead in positive steps to ameliorate them.

Due to over use of fossil fuels, oil, gas and coal, the worlds concentrations of atmospheric gases is changing. Carbon dioxide (CO2) has now increased by just over 50% above pre industrial levels (422ppm) and Methane is now up by 160%! (1900ppb).

Both of these gases trap heat energy in the atmosphere causing the planet to heat up. For this reason they are called Greenhouse Gasses (GHGs)

So far the planet has heated up about 1.2C

The United Nations Intergovernmental Panel on Climate Change, IPCC, has international treaties which ask countries to make pledges to reduce carbon emissions. From its inception in 1988 until the Paris agreement in 2015, nobody could agree on any cuts.

At Paris 192 countries agreed to make cuts to try to limit global heating to 1.5C.

Since then the amount of carbon and Methane have continued to rise each year.

There are many ways we can cause less GHG emissions…

Due to pollution, global heating and loss of habitat, industrial farming and fishing, many species are

Plastic releases greenhouse gases throughout its lifecycle and it’s interfering with ecology that sequesters carbon!

Plastic can’t be part of a circular economy – recycling won’t solve the problem.