At least 1.5tons of Braeburn apples collected with colleagues from Hythe, Folkestone, Canterbury and Thanet today from a orchard in Elmstone nr Preston.
Thanks to AC Hulme for hosting us again

Food going to food charities in east kent plus the majority going to the The Felix Project including local charities:
Big Thank you to our gleaning volunteers today - Tim,Sally,Janine,Tom, Jill & Hub, Lucy and Steve.
This our last glean of 2020 - its our 31st !
With nearly 10 tons of food collected and distributed locally
If you want to join us in 2021 please join our email list gleaning@dealwithit.org.uk
Posted by SteveW at 3:41 PM 1 comment:

We did our last potato glean of 2020 at Boundary Road Farm today - Many thanks to Trevor Bradley for his continued support and generosity.

Thanks to our volunteers Tim, Sally and Steve who filled some 20 sacks today - food going to:

Posted by SteveW at 2:16 PM No comments: 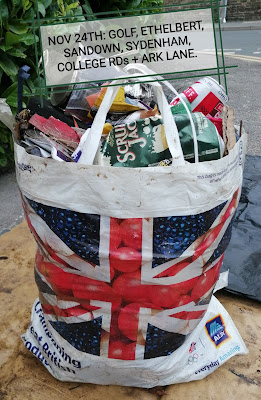 I'm learning a lot about plastic: its versatility, durability, pliability, transparency, lightness - how many more abstract nouns can I apply to this awesome material?! 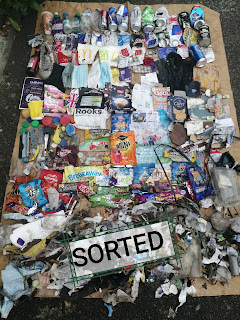 Aldi's patriotic bag fails to burst as I cram in 100s of bits of litter - over 90% of which are plastic - picked from just some of North Deal's streets last week.

Just as I think it's impossible to squeeze another wafer-thin fragment of film into the Union Jack carrier, I manage to slide the sliver in.

Emptying it is almost an act of artistic beauty: the colours - bright, shiny, twinkly. The sound - crisp, crackly, tinkly. Seasons Greetings. There will be tons more to pick up after the 25th. 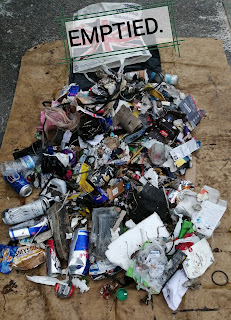 Posted by SteveW at 2:03 PM No comments:

View this email in your browser

Firstly, we would like to thank all of you who have responded to the Call for Evidence about the proposed Highly Protected Marine Areas. We really appreciate it as every submission shows that people really care about protecting the Goodwin Sands.

Secondly, if you haven't had the chance to do it yet, this is a gentle reminder that you still have time, as the consultation runs until 15th December 2020.

Please see below for tips on what to say and a link to the Call for Evidence. It really doesn't take long to complete!

The Goodwin Sands MCZ is a prime example of how marine protection just isn’t working; the government’s marine licensing authority granted a licence to remove 3 million tonnes of a protected habitat for landfill in Dover because they were advised by Natural England that the fauna would recover within five years.

This action makes a complete mockery of the meaning of the word ‘protection’. Why is a marine protected area even being subjected to an activity from which is has to recover?

The failure of MCZs' to protect sensitive marine areas has been recognised by the government so they are now considering a new initiative – Highly Protected Marine Areas (HPMAs). Within these HPMA’s, commercial activities that damage the seabed, including marine aggregate extraction, or sand mining as we prefer to call it, will be banned.

Five pilot sites have been proposed for designation as HPMAs and the government has issued a a Call for Evidence to give the public an opportunity to express their opinion.

Goodwin Sands MCZ is not included on this list but we feel very strongly that it should be, since none of the proposed sites are under similar threat from sand mining. Not only has the Goodwin Sands been recognised by Defra as containing habitats and species worthy of protection but the sandbanks provide a vital sea defence for the chronically eroding East Kent foreshore.

And of course, the area is a graveyard of over 2,000 naval and merchant ships, their crews and passengers and contains the graves of scores of brave young airmen from the Battle of Britain. That in itself should make it a prime target for protection.

Indifference is tantamount to agreement! We are therefore urging you to please respond to the government’s Call for Evidence with your views before 15th December 2020.


Like us, you may not be able to provide any relevant information about the currently proposed sites. We have used box number 9 at the end of the online form labelled 'Feedback on the Online Survey' to submit our views and recommend you do the same.

Reasons the Goodwin Sands MCZ should become a pilot HPMA include:

Thank you for your invaluable help and support!

Respond to the Government's Call for Evidence before 15th December 2020


Copyright © *|2020|* *|Goodwin Sands Conservation Trust|*, All rights reserved.
You are receiving this email because you opted in via our website.

Want to change how you receive these emails?
You can update your preferences or unsubscribe from this list.

How far does litter travel? 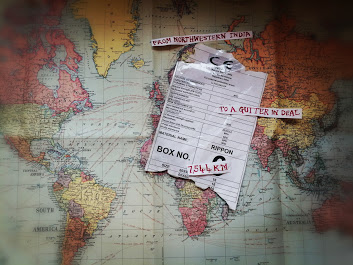 The feather-light packaging that has dramatically reduced costs for manufacturers is swiftly transported considerable distances from the unlidded recycling boxes where it is put out for collection.

But when I find a label from a pack of Indian sandstone in a gutter in Ethelbert Road, that really sets me thinking.

What is the true cost of convenience & desire?
Helen C
CleanupCrew@DealWithit.org.uk
#DealLitterDiary

This week's glean has gone to:

Posted by SteveW at 2:54 PM No comments:

A recent BBC news item (see link below) shows, people are celebrating the unexpected discovery of a rare plant in Norfolk which has not been seen there for over 100 years. The plant is Grass Poly and it is one of the UK's rarest plants.

It is the same plant that is growing on one of the proposed development platforms at Betteshanger, found by the Kent Plant Recording Group earlier in the summer. Betteshanger is the only known site in Kent where it grows.

Far from celebrating its presence here we are anticipating its destruction if the Quinn Estates development goes ahead, despite untested proposals to 'translocate' it to Betteshanger Park.

This is what Professor Carl Sayer, who found the Grass Poly in Norfolk has said to the Friends of Betteshanger.

"To celebrate the re-occurrence of Grass-Poly at one site and then destroy it at another would seem madness to me and I am in full support of your efforts to protect the site you mention and importantly this important endangered plant."

Will Dover District Council celebrate the presence of Grass Poly at Betteshanger ? Or will they risk its destruction by giving Quinn Estates the go ahead for their development ?

Only time will tell.


Friends of Betteshanger are a group of local people opposing Planning Application 20/00419 by Quinn Estates which proposes to build over 200 houses on the old pit head site at Betteshanger, much of which has been rewilding for many years. It is now a haven for wildlife of all kinds. New members welcome on our private FB page, Friends of Betteshanger.
Posted by SteveW at 2:41 PM No comments: