We had the results of the poll for our first beer tonight at the Deal Hop Farm meeting at the Just Reproach.

We had a long list of 25 names and 93 of our members voted. No one selection got more than 10% of the vote.

We took the first three position nominations to Ripple Steam (RSB) for the final decision - this included 8 names for the shortlist:

The Decision of Judges at RSB was to go for Hopping M.A.D (Made Around Deal) – so Congratulations to Sophie in Sandwich who was awarded the display set of new 3 bottled beers from Ripple Steam (ours will be the fourth!)

All the runner ups on the shortlist will receive two bottles for their suggestions. The Judges gave some great feedback on the names suggested and were impressed in people’s creativity.

I will contact all the runners up in the next couple of days. Next step is the design of the bottle label which we need to complete by the end of June.

Thank you everyone who participated from the Deal Hop Farm and our colleagues at Ripple Steam
Posted by SteveW at 8:57 PM No comments: 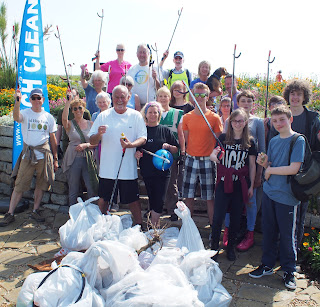 Deal With It – Deal’s local Green Community group – held a Beach Clean at the Sandown Castle end of Deal Beach. In about 1 and half the 30 volunteers managed to collect about 60kgs of rubbish.

Vicky Nicholls Beach Clean Organiser said “ We are very grateful to our wonderful volunteers who donated their time for the beach clean. We are always like to do a clean at this end of the beach to show our support to the great work that the Sandown Castle Community Garden Group is doing at this end of the town”

Details of the next beach clean can be found at the Deal With It website at www.dealwithit.org.uk or at the group’s facebook sites. Email Info@dealwithit.org.uk
Posted by SteveW at 11:42 AM No comments: