The #GreatBritishBeach Clean in Deal

A big thank you to our 22 volunteers who had a busy time on the Deal Beach Clean last Sunday.

We collected some 19 bags with 38kgs of rubbish in just over an hour and half.

Special thanks to the Rotary Club of Deal who donated monies for us to buy 10 new pickers and some bag hoops.

As always thanks to our Deal Beach Warden, Wendy Boorman for organising all the MCS forms and post clean work to get the data back the MCS.

We are looking at one final beach clean for 2015 in December....
DWI Supporter Jayne from PRFilms has done a short film of last Beach Clean at Sandown Castle end of Deal Beach in July.

We are seeing an increase in tree loss around the world. This is very concerning, not least because of the coming Paris climate talks, as reducing emissions due to deforestation will play a significant role. Globally, 18 million hectares of trees were lost last year due to both natural and manmade causes.

Trees covering an area twice the size of Portugal were lost worldwide in 2014 and this was caused mostly by the demand for palm oil which is estimated to be present in half of all packaged goods, from chocolate bars to shampoo. Indonesia is the world’s biggest producer of palm oil but has introduced a moratorium on the sale of forests in recent years under pressure to reduce its carbon emissions.

We are used to hearing about tree loss in Brazil and Indonesia but researchers were surprised to learn that five African states featured in the list of ten countries where forest loss has accelerated since 2000. One of these is Madagascar, which lost 2% of its total forest area to agriculture, mining and the timber industry last year.

Developing countries, such as Liberia, realise that the ecological consequences of deforestation are worrying but feel they must consider growing palm oil because of the economic pressures to create jobs.

We must bear in mind that developing nations have to feed an ever growing population, are trying to build up a steady economy and so need encouragement to look further ahead to create sustainable development for the long term.
Posted by SteveW at 12:48 AM No comments:

The event is supported by NEA ( National Energy Action), the leading UK organisation on Fuel Poverty and by DECC, British Gas and Dover District Council.

We’ll have some interesting gadgets and energy saving advice for you.

Bring your own lunch and stay for networking.


Have you noticed that not a day goes by at the moment without some mention of the power of communities? Have you picked up on the fact that people are pulling together to bring change and progress in their own communities? If you've been hearing about community owned energy projects – examples of communities running crowd-funding campaigns to install solar panels on a school roof etc - then this is going to be of interest to you.  All around, people are tapping human energy to tap, gain community control and ownership of how we power our communities.
This mini conference is an opportunity to meet people who are delivering local energised programmes that are

DWI Supporter Jayne from PRFilms has done a short film of last Beach Clean at Sandown Castle end of Deal Beach in July.

Our Next Beach Clean is on 20th Sept 9:30am meet at Deal Pier. Part of Mcs's UK wide 'Great British Beach Clean'

If you cannot see the video here is the YouTube link

Please vote to kick start a project that aims to put solar PV on Betteshanger Welfare and Social Club and support more community energy work for people living in and around Mill Hill.

It’s all down to who wins the most votes and we are lagging in third place at the moment – way behind the lead who has 300 + votes.

Come on Deal – let’s show them that we are a community that gets things done!

Aim
We support communities to own and control both the use and the generation of energy. We do this in two ways: 1. We train local energy champions to City & Guilds Level 1 Introduction to Energy in the Home. These champions then assist at outreach events to encourage people to review their energy bills and to switch energy providers. Working with vulnerable consumers, we identify people who are still on standard tariffs and who can save an average of £200 on their bill. At the same time, we are able to talk about energy-efficient retrofit measures. We have built a 300 strong cluster of local SMEs who are involved in energy efficiency ( insulation, cavity wall, renewables) and our aim is to have our energy champions make referrals to these local installers. We are also building a partnership with local credit unions to find attractive financing options for people to upgrade their homes. 2. Community-owned renewable energy projects. We are drawing on the expertise of Community Energy South to create share offers for community owned energy in Kent. We offer peer mentoring from groups who have been there and done it. We aim to support 10 to 15 groups across Kent over the next three years.

Strengths
On local energy matters, we built our reputation by offering home surveys, using a thermal camera, running energy fairs and training unemployed women to be local energy champions. We’re successful at winning funding and have helped thousands of people save money on their energy bills. Our network covers all sectors: voluntary groups; housing associations, local authorities; health organisations; SMEs and local large businesses. We are collaborative and make very good partners in projects. Small enough to be flexible, we are open-minded about overlaps. Our directors’ extensive experience includes finance, large corporates, local government, voluntary sector and small business. Our solutions offer financial sustainability, eg community-owned energy. We offer a return on investment and we include all sections of our community. We collaborate, thinking about the needs of our partners. Our approaches are refreshingly progressive - all working towards a common and greater good. Local people are excited about what we do and they like that we are part of the local community. We have told an energy story in a way that makes sense to people and which gives them confidence that we can drive forward positive local change. We are willing to support and grow projects and then let committed, well-trained communities take charge.

Benefits
This community owned energy project will • Bring energy savings to a group of community buildings in the heart of a deprived community. • Create a community owned asset with a community fund to finance continuation of energy champion training, a community tariff and energy efficiency measures identified, installed and financed through local organisations. • Give our community leverage for future grants and project funding Eg Big Lottery funding or EU projects and build on the pride and empowerment that comes from a community taking charge of its own future.
Posted by SteveW at 5:18 PM No comments: 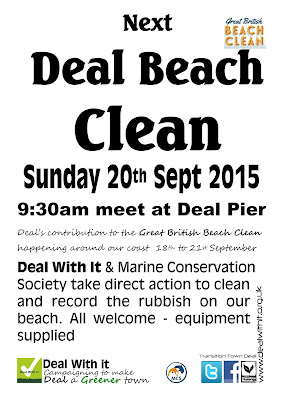 Deal With It is supporting the Marine Conservation Society's UK Wide 'Great Brtitish Beach Clean' (which  runs nationally between 18th-21st Sept) with a Deal Beach Clean on Sunday 21st Sept at 9:30am meeting at Deal Pier.

The Objective of the Great British Beach Clean is to take a snapshot of the rubbish on our beaches and for the MCS to then analyse how things are changing. Deal With It will be supplying rubbish pickers, bags, gloves and monitoring sheets we just need your enthusiaism and 1-2hrs of time on the 21st.

We have been very fortunate to have a donation from  Rotary Club of Deal  which has allowed us the purchase 10 new pickers. All donations from groups, individuals and businesses are always very welcome

Posted by SteveW at 9:36 AM No comments:

It seems that our ‘greenest government ever’ is about to deal another stinging blow to the renewable energy industry. In a consultation document just released by the Department of Energy and Climate Change (DECC) it is proposed that the feed-in tariff, paid to householders who install solar panels on their roof, should reduce by 87%.

From 1 January, 2016 the feed-in tariff for small scale installations will reduce from 12.47p per unit to 1.63p per unit, taking away any monetary incentive to install solar panels. Large scale, stand alone units will only be eligible for a payment of 1.03p per unit instead of 4.28p. These cuts, alongside the already announced removal of financial assistance for new onshore windfarms and for home energy efficiency measures can only lead to many losses of companies and jobs in the fledgling industries that the country desperately needs.

The DECC documents also admit that cuts in the tariffs could lead to fewer installations – probably the most obvious conclusion that could be reached! The cost of installing solar panels has gradually reduced over recent years as more and more people are able to afford them so a reasonable cut in feed-in tariffs is only to be expected but surely, this is a step too far?

A representative from Friends of the Earth commented that these cuts will prevent almost one million homes, schools and hospitals from having the advantage of independent, clean and renewable energy.

Our government would rather subsidise fracking for gas rather than clean energy.
Posted by SteveW at 9:28 AM 1 comment: