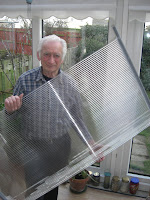 The EKM published Jack Domane's letter but with a couple of key edits.... We are happy to publish the full letter but its Jack's personal views:
DRILLING FOR METHANE GAS, A GODSEND IN DESGUISE?
"Before we say no let us coordinate the facts. We are to be dependent upon Russia for our gas, oil from militant Islamic States and now electricity from the Continent as our power generating system degrades at an alarming state. There are Government considerations of buying power from Iceland with thousands of kilometres of cable at enormous cost and power loss. Why? When we have our own geothermal power less than 3 miles under our feet where we stand.

Drilling a hole the size of a football a mile down into the earth will do no harm and the samples gained would provide enormous value. Hydraulic fracturing (fracking U.S) with water and sand is not a big seismic problem but adding highly toxic chemicals that could enter the table above is A POSITIVE NO.

If permission could be granted for this research project with a CONDITION that they drill further, to 4.500 metres (2.8m), which is down to deep geothermal engineering, we are going forward in solving our energy problem. It should be realised that the mass of this world that we live on is 99.97% over 200c, a very thin crust with eternal heat just under our feet. With 2 holes drilled a few metres apart through sedimentary, sial and into the basaltic sima rocks, we have clean, sustainable heat and power lasting into eternity. The engineering process is quite simple, a ram pump pumps water down to the rocks above lithosphere plate level that are above the magma, turning to pressurised super heated steam and passes up the secondary pipe to turbines, which turn generators feeding the grid. The lower pressure steam is exhausted into pipes providing heat for houses, commercial buildings, offices and schools etc. and as it condenses it is passed back to the ram pump for re-circulation, the pump itself operated by HP steam. Is the system new? No the system was used in the 1920’s and still going strong. No carbon, no waste spoils and free. 26 countries have geothermal power WHY NOT THE U.K?

Whilst I rigorously oppose any attempt to use highly toxic chemicals into the earth I would gratefully welcome the opportunity to persuade Coastal Oil and Gas Limited to drill for tests into Deep Geothermal for heat and power.

And finally, why aren’t these tests being carried out at or by the Richborough Power Station site with its existing road and grid infrastructure that is well away from residential areas, unlike the proposed site at Woodnesborough