The SW gets Tidal & Wave energy 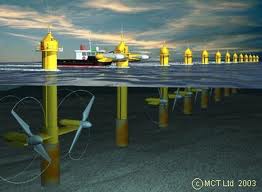 A huge area running from Bristol to Cornwall and the Isles of Scilly will today be named as the UK's first designated zone for the development of marine energy.

Climate change minister Greg Baker will announce the South West Marine Energy Park (MEP) and launch a prospectus outlining how the public and private sectors will work together on the project during a visit to Bristol.

The prospectus says the South West MEP will make it a priority to secure additional incentives for business investment including, business rate reductions, higher levels of capital allowances, Regional Growth Fund and other enterprise grants, inward investment, and access to the Green Investment Bank.

It will also look to coordinate port and infrastructure development to support the industry's growth.
As well as national and local government, the Crown Estate, local enterprise partnership Regen SW, the Universities of Plymouth and Exeter, and marine energy testing site Wave Hub will all be involved in the marine park.

"This is a real milestone for the marine industry and for the South West region in securing its place in renewables history as the first official marine energy park," Barker said in a statement. "The UK is already a world leader in wave and tidal power, so we should capitalise on this leadership to make marine power a real contender in the future energy market."

The government has earmarked marine energy as having the potential to deliver between 150MW and 300MW of installed capacity by 2020, contributing £15bn to the economy by 2050 as well as creating thousands of jobs and providing a predictable source of low carbon electricity.
Over the last year it has brought in a series of measures to encourage the nascent industry, including invested £20m to scale up prototypes and upping the levels of support under the Renewables Obligation subsidy scheme from two tradable renewable obligation certificates (ROCs) per MWh to five ROCS per MWh.

Further parks are also envisaged in Scotland at the Pentland Firth and Orkney Islands.
Johnny Gowdy, programme director at Regen SW, said the region's marine business base, strong manufacturing sector, and world leading research and demonstration facilities meant it was uniquely placed to accelerate the development of the technology.

"The launch of the South West Marine Energy Park is a recognition of the great resources, research facilities and businesses we have in the region," he said. "It also puts the South West in a position to attract future investment, and to be at the forefront of the new global marine energy industry."
Posted by SteveW at 1:00 PM