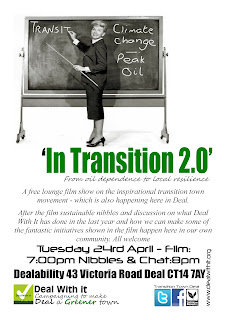 We are showing a preview at a special lounge film show of the inspirational new film on the Transition Movement - the catchly named 'In Transition 2.0' .

This is a crowd sourced and funded film which captures the excitement and creativity that transition iniatitives have unleashed in their local communities and shows how their are transforming their communities into sustainable ones.

Guess what. This what we are doing, here in Deal. So you get can get stuck in on your own doorstep to transform the world.

Film show starts at 7pm followed by sustainable nibbles, chat and our AGM  at 8pm. Don't worry we plan a bigger film show later in the year.