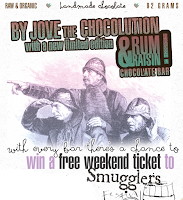 The ‘Golden Ticket’ for the lucky purchaser will get them free entry into the fabulous Smugglers Records’ Festival which starts this coming weekend.

Chocolution's founder Kieran Renihan is active supporter of Deal With It and has developed his social business by building on it ethical and sustainable foundations:

He has direct trade relationship with Cocao producers in Ecuador, sells direct to the consumer or thru local independent Deal shops, creates his wares in pop-up kitchens in churches and schools and does lots of educational work in schools on what real chocolate is and where it comes from.

Kieran also prides himself on the raw quality of his chocolate which means little added fat but retaining its healthy minerals.

He hopes later in the year to use his skills to inspire local unemployed people in the possibilities of a chocolate future.

The limited edition bars are available at Peppers, Allotment, Borough Wines, Astor and the Black Douglas

For more information on this week's Smugglers Records’ Festival see www.smugglersrecords.com.
Posted by SteveW at 9:03 PM