The Supermarkets - "Doing the Right Thing"? 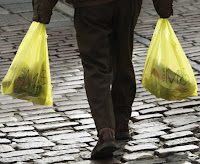 Marks & Spencer has recently launched a national advertising campaign pushing its £200m ethical plan and chiding rivals for giving up on "fashionable" eco-policies due to the recession.

The national press and internet campaign, "Doing the Right Thing" trumpets the key tenets of its £200m five-year ethical trading initiative, called Plan A, a five-year 100-point 'eco' plan" which includes becoming carbon-neutral by 2012."It's the only way to do business," insists the company. "There is no Plan B."

The retailer said that it has achieved 39 of the 100 commitments outlined in the plan and that the £200m cost has been more than offset by savings made through policy changes relating to energy efficiency and waste.

So should we be applauding M&S and other supermarket chains as the new friends of the Earth? The environment is certainly a big seller for them and there is no doubt that these large chains can affect the buying habits of a wider public with their glossy campaigns. But can we trust them and their motives?
The slow change in attitude from the supermarkets over the decades must surely be partly thanks to consumer pressure, environmental campaigning and government legislation. However, it is also the rise of corporate social responsibility that leads many supermarkets to make claims that they are setting higher standards for themselves than any government would dare to impose through regulation. Marks and Spencer, for example, has promised to become carbon neutral and to cease sending waste to landfill by 2012, and to stop stocking any fish, wood or paper which has not been sustainably sourced. Tesco promises to attach a carbon label to all its goods. These standards, moreover, are rather higher than those the British government sets for itself. M&S has pledged to use carbon offsets (paying other people to make cuts on its behalf) only as “a last resort”.The government uses them as a first resort.

So these days, are the campaigners and the politicians redundant? Not a bit of it. The corporate social responsibilities adopted by any company are only voluntary - just because they set high standards or make lofty promises it does not necessarily follow that they will deliver on them. It must fall to the government and the public to hold retailers to account.

Sir Terry Leahy, CEO of Tesco has said that he aims to cut the distance that Tesco’s products travel, especially by air. He will also switch some of Tesco’s road freight (he did not say how much) to rail. But he said nothing about reducing the journeys made by his customers. Shopping accounts for 20% of car journeys in the UK. By closing their out-of-town stores and replacing them with warehouses and deliveries, the supermarket chains could both reduce the energy costs of their buildings and (according to government figures) cut the traffic caused by shopping by 70%.

And what of the dominance of the superstores? The Competition Commission is investigating the “land bank” accumulated by Tesco - a huge portfolio of sites on which the company appears to be sitting until it can obtain planning permission. Many of them are out of town. If Tesco develops them, it will drag even more cars onto the road. Out-of-town shopping is incompatible with sustainability.

One decision the big supermarkets will not make voluntarily is to relax their grip on local economies. It will always be harder for small businesses to work with the supermarket bullies than with the local baker or butcher; Tesco’s economy will continue to favour the big, distant supplier over the man down the road. And what of the sense of community independent small shops help to foster, which encourages people to make their friends close to home? If so-called 'love miles', those essential (emotionally at least) journeys to far-flung friends and family, are the most intractable cause of climate change, we need to start cultivating as much community spirit as we can.

In any case, shouldn't we be trying to consume less? Less is the one thing the superstores cannot sell us.

The big retailers are competing to convince us that they are greener than their rivals, and this should make us glad. But we still need governments, and we still need campaigners.

See the M&S campaign for yourself at http://plana.marksandspencer.com/
This article is a summary of a collection of articles written by George Monbiot, Fred Pearce and Mark Sweeney.
Posted by Deal With It at 2:06 PM