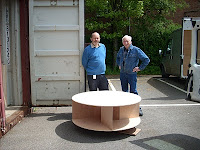 The Fair Deal Energy Workshop Group has recently posted their progress report - the first pilot of the heat exchange unit from a south facing conservatory which with modifications costing about £80 to build & install have now paid for itself in savings and produced a carbon saving of 945kg in less than a year. (BTW Jack reports that he used a kit for the conservatory costing about £1500)

The group's next project is wind turbine that should be able to operate in  built up town area. The prototype is going to be tested soon- so watch this space!

The photo shows the impellar of the turbine with Jack and Barry from the workshop group.