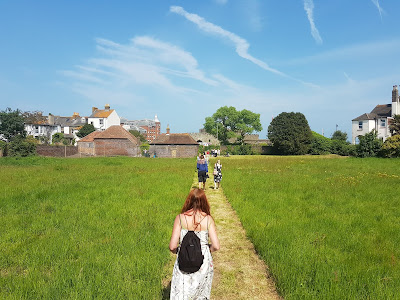 The community volunteers bringing back the Captain’s Garden at Deal Castle into use have an Open Day on Easter Monday, 22nd April from 10:30am to 2pm.

The historic walled garden is normally not open to the public and is an amazing 1.2 acres space in the centre of Deal.

Since December 2017 volunteers from Deal With It and Deal Hop Farm have been recovering a small part of the garden; with a hop garden, wild flower meadow, flower & herb beds, a veg & fruit area and two crop circles of barley.

The initiative is in partnership with English Heritage.

Also at the Open Day, local brewers Time and Tide (brewing partners to the community hop growers in the Deal Hop Farm) will have some the lastest beers using Deal Hop Farm Hops to sample. 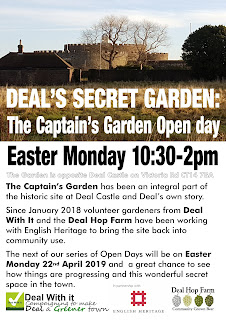 Email ThisBlogThis!Share to TwitterShare to FacebookShare to Pinterest
Labels: CaptainsGarden