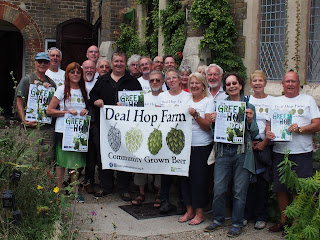 The next day Ripple Steam Brewery will be using the hops in to brew a Green Hop Beer.

The project, launched in the town in January, has grown to a patchwork farm of 130 sites in peoples’ gardens, allotments, community gardens and spaces, including English Heritage’s kitchen garden at Walmer Castle.

Steve Wakeford, of the Deal Hop Farm said “The project has gone brilliantly and thanks to our enthusiastic ‘hoppers’ we are well placed for an excellent first year’s crop.

The harvest is going to be great fun as well as quite challenging; as we are attempting to harvest on one day across all our sites.

The idea is to pick our hops on Thursday 14th from 3pm and have then available for brewing very early on Friday 15th by our partners at the Ripple Steam Brewery.

The Landmark Garden on Deal high street will be our main base for people to drop off their picked hops for weighing.

We will also have hop pickers in the garden picking hops off bines where people are away. 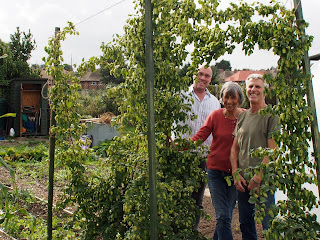 As we don’t have an Oast House, just yet; Our hops will not be dried but used as ‘Green Hops’ to give a massive flavour burst to our beer – named by members as ‘Hopping M.A.D {Made Around Deal} which will be available in the town from the end of October.”