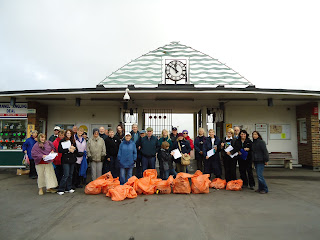 About 40 people braved this cold, wet Sunday morning to enjoy a lovely breakfast of egg or bacon rolls, tea or coffee courtesy of the Co-operative Group and Jasin's Restaurant at the end of the pier. Thus fortified, they set off to remove 110kg of litter from Deal Beach in just one and a half hours.

Several organisations were represented, including 'Deal With It', Rotary Club of Deal and the Marine Conservation Society.

At noon, the group gathered at the Landmark Centre in the High St. to watch a short film and talk about the 'You Seas, Your Voice' campaign supported jointly by the Co-op and the Marine Conservation Society, which was followed by a light lunch
Posted by SteveW at 8:44 PM