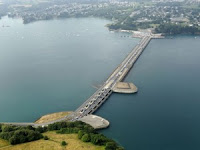 We may have the longest coastline in Europe and the channel the highest tidal change but we just cannot make Tidal Energy happen. A few weeks after the Coalition Government put a red line through the Severn Barrage France has been using Tidal energy for nearly 40 years with the Rance River in Brittany....

Although France is rich in many areas, it is very poor in energy resources. The Germans and Spanish have coal, Britain has enjoyed an abundance of oil, gas and coal, the Dutch have gas from the North Sea, and the Swiss enjoy plentiful hydro-electric power.

French coal mining ended in April 2004 with the closure of the last pit in the Lorraine region. Until the end of the 1970s, French natural gas supplied between six and seven million tons of gas per year, contributing up to 15 per cent of France's primary energy production, but this has now fallen to just 2 per cent, and oil production now stands at less than 1.5 million tons per year..... read more here

Email ThisBlogThis!Share to TwitterShare to FacebookShare to Pinterest
Labels: tidal